Hi there! I want to share my current project which is a hexapod robot using the Maestro 24 channel to coordinate all the servos in the legs. This hexapod uses 18 servos in six legs as well as three more servos in the “neck” that will eventually control head tilt and front leg rotation. 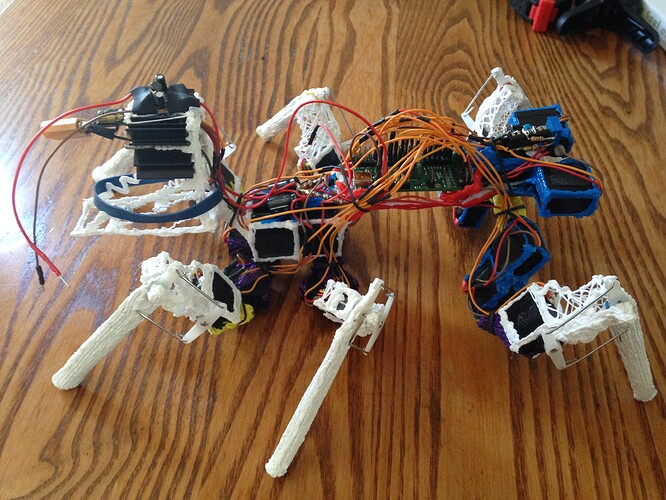 After my first rough prototype, I designed the new servo assembly virtually in Sketchup. Then I used a 3D pen to assemble the servos into this ant-like hexapod.

My goal is to create a biomimetic insectoid robot that walks, runs, and maybe in the far future, flies. I deliberately favored an insect form over traditional hexapod robot designs because I want my robots to be more like animatronics.

At the moment, I am troubleshooting and issue where the power supply drops from 5 to ~3 volts and the maestro sends an extremely short pulse to all the servo channels. As a result, the legs twist way beyond their safe limits and the servos begin to heat up. I hope to solve this soon before I burn out a motor or break gears!

This is my first attempt at using a digital microcontroller in a robot. Previous projects of mine have depended on analog circuits to create servo pulses that oscillate in duration.

Your hexapod looks great; I love how the 3D pen gives it a mecha-organic look!

It sounds like you might have a power issue from your description, so you might consider a higher mAh capacity battery pack or try recharging your batteries (if they are rechargable). If that does not work, and you would like to troubleshoot further, you can make a new forum thread in the “Servo controllers and servos” section of the forum with some additional details about your servos and power supply and we would be glad to help.

Thank you for the remarks! I agree that I am probably having a power supply issue. I had no issues when connecting to a large pack of D batteries in series at 6V. Normally, I am using a BEC to convert a 3S lipo pack to 5.1V. The BEC I am using can be reprogrammed to a higher voltage, so I am planning to try that. The BEC claims to provide 10A surge current, but that apparently isn’t totally accurate. I am considering providing the ~12 volts from the 3S lipo directly to the Vin of the Maestro too.

I’ll update when I have new results and I will check out the other thread as well.