Robotics and electronics discussion Mechanical design and actuators
mgw May 4, 2012, 5:37am #1

Ran across this design for an adder-subtractor gear box that uses two differentials and a few other gears to drive a two-wheeled vehicle.

For my current project, I just want the vehicle to drive straight (with either constant speed or acceleration set by feedback from wheel encoders), and to also stop and turn precisely. Right now, I’m getting too much wheel slip trying to use differential drive with independent motors on each wheel, so I’m wondering about the advantages and disadvantages of the adder-subtractor drive train instead. Has anyone tried this or have an opinion? 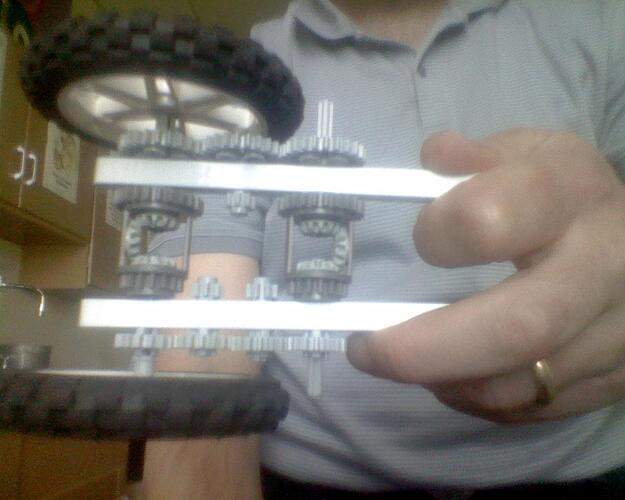 OK. I got ahold of some legos and built this thing. The top ends (as shown in the picture) of the differentials are connected by a single gear, and so forced to turn at the same rate. The bottom ends are connected by two gears and turn in opposite directions at the same rate. Turning the case of the left differential drives both wheels at the same rate as if on a fixed axle, minimizing slipping. Driving the case of the right differential with a second motor causes the wheels to spin at different rates. I plan to attach it to a lego frame and motors for further testing. I would like to pursue this direction further on my actual robot, which means I would want to build it out of metal gears like those that come with the pololu micro metal gear motors so that I can attach a 25D motor with encoder to it. Any suggestions for where to find a source of parts and possibly some help in designing and building it?

Unfortunately, I don’t have a good suggestion for where you can get individual gears to make your own gearbox, but a five-second google search turned up:

Maybe you could get some help from a local robotics club or a mechanical engineering student who is looking for an idea for a final engineering project?

I’ve seen that sight, and also contacted the local university, robot club and a business that makes custom gears. Assuming I’m successful and that the tests indicate that I really want to use it (all yet to be determined), how would I order a 25D motor with encoder but without gear box?

Unfortunately, we do not carry the motors by themselves. We might be able to do something special for you if you are looking to place a large order, however. If that is the case, you should email us directly for a quote.