Hi,
Does anyone know what the 9.25V boost switcher is that is used in the 3pi robot?
pololu.com/file/0J122/3pi_quickstart.pdf
I want to combine the pololu soft power button with this and 5 and 3.3V linear regulators similar to what is shown in the top of the schematic but I can’t seem to find any switching regulators that meet these specs.
thanks
-tkw

We don’t want to give out the exact part yet (though it’s not that hard to figure out if you have a 3pi), but it’s not a fixed 9.25V regulator. There are a lot of parts out there that do general boost switching, and you have to pick the other parts to get the right voltage.

We’re planning on coming out with some stand-alone regulator products, and the boost converter is on the list. It’s still probably a few months out, though, so I don’t know how that will work with your schedule.

Thanks for the heads up. I did find the component that’s on the 3pi and managed to get ahold of one from digikey. I’m building my own version right now but I will keep my eyes out for the official one cause I’m sure it will be a lot cleaner. I couldn’t find anywhere that carried the 8 pin MSOP package, just the MLPD, and soldering to those little pads was a huge pain! Can you tell me though, will your final product have 5V and 3.3V outputs?
Thanks again

We don’t have very specific plans yet, but it’s likely that we will have at least some 5V and 3.3V parts. How much current would you like?

If I was dreaming 2 Amps would be nice, but i’d still buy it if it only had 1A

Hmm, that’s a lot. I don’t know of any integrated components that can do 2A, plus the idea is still to have a meaningful amount of current (also more than 1A?) at the 9.25V output, so if we’re talking a total of 3 or 4 amps, that’s approaching 10A on the input side. That might get pretty expensive, so making a single product with all three outputs might not be that practical.

Thanks for the suggestion. I don’t remember all the particular parts we’ve looked at, but there are more compelling ones. The part is quite expensive, and the relatively low switching speed requires bigger and more expensive inductors. The operating voltage is also not really what we’re after: we’d like to operate off of 4 (Ni) cells, and they’ll get under 4V fast; on the other end, the 40V is kind of a waste for us.

And, I mentioned this before, but “provide” is kind of misleading: the maximum switch current might be 5A, but the current delivered when we double the voltage will be less than half that.

So, for us, something like the LM3478 might be more compelling. It’s much cheaper, even if we have to get an extra MOSFET, and it doesn’t have the other drawbacks I mentioned. There are a lot of similar parts out there, though; I just saw that one on the “also recommended” list for the part you suggested.

We have released the 3pi boost voltage regulation circuit as a stand-alone product. The tiny board has a trimmer potentiometer that allows you to adjust the output voltage, and the minimum input voltage is just 1.5V. There are two versions available that allow for different output voltage ranges: 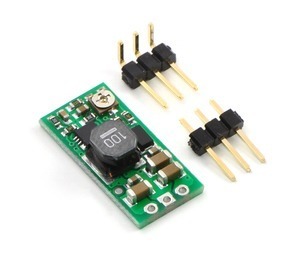