Hi guys, I ordered a 6 channel maestro rc controller and the medium mosfet and i soldered everything in place and connected everything the way it’s supposed to be according to the diagram but I’m getting no lights via the mosfet.

What I’m trying to do… I have the maestro programmed to hit a button, it turns 2 servos, then some leds flicker 2 times and turn on. hit the button again it turns the servos and the lights turn off.

Because the led lights are being run off of the signal cable they’re not that bright. I wanted to make them brighter but have the same flicker effect.

I’ve tried setting the channel 3 (the led one) as a servo using the maestro control panel, instead of output. I’ve ran the slider back and forth while everything is connected and the lights do not come on.

I do have 1 question about the diagram. from the load power its connected to a ground with a black line, the “load” is connected via a brown wire, why is that?

I’ve connected the “load” negative lead to the GND terminal just below “load low” and the lights turn on.

I’m out of ideas, any help would be more then greatly appreciated. 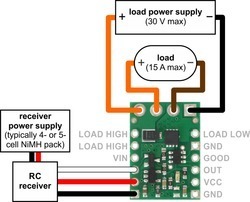 It is a little unclear to me what you are trying to do. The RC switch with medium low-side MOSFET is intended to be used with RC signals. In order to turn the MOSFET on, you will need to send an RC pulse longer than 1700 μs (you can adjust the threshold and activation direction using the learning mode). Could you verify that you have the channel’s mode set to “Servo” and try sending to the RC switch a pulse longer than 1700 μs with the Maestro?

The load and ground wires are different colors to show that they are on different nets. The brown wire goes to the drain pin of the MOSFET. When the MOSFET is on, current can flow from the brown wire to GND. You might find the schematic below helpful in understanding how the RC switch works. 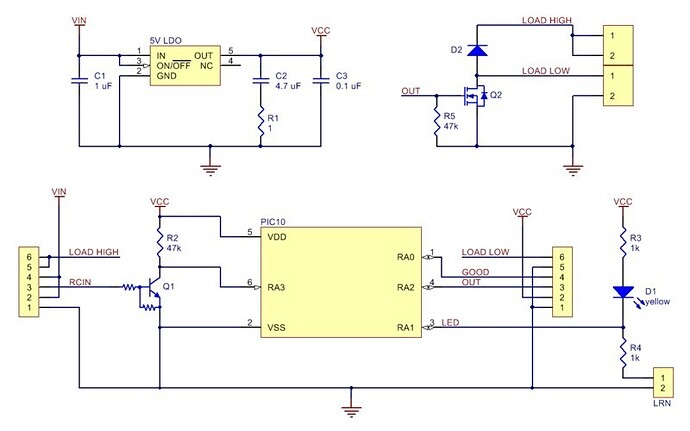