Hello! I’ve put together a page of 3pi videos that you can view here. I’d like for this page to grow as more people take videos of their 3pis doing fun and interesting things. If you have such a video, please post a link to it here along with a description of the event or project.

Very cool, thank you for sharing that with us. I’ve added the video to the 3pi video collection. I’d love to hear details about how you modified the 3pi to work as a fire-fighting robot. Does it have a sensor to detect the fire?

I have added a number of interesting new videos to the 3pi videos page. Our customers have been doing some pretty cool things with their 3pis!

a friend had a couple of 3pis laying around. He was kind enough to add an xbee module and an infrared led to one of them, so I could play with it. The idea is to procedurally control the robot via visual tracking. Here are the first two tests I made:

The algorithm is pretty basic right now, with plenty of room for improvement. Now that I’ve got the hardware done, I have a few different plans for the audio analysis. Right now, the sound following is based on the amplitudes being registered at the mics.

Thanks for sharing! That’s definitely cool and different from all the other 3pi projects I’ve seen so far. I’d love to hear more details about how it works, including the components you’re using (maybe a thread in the “Share Your Projects” section?). In the meantime, I’ll get your video added to the 3pi video library in the next few days, and I’ll update it if you post any further videos with more advanced tracking algorithms.

great robot…wonder to have one

So this is what I have been working on for the better part of this year. It was part of my honours thesis which explored human-robot interaction with and embodied creative system.

Basically I repurposed the robots and attached an Arduino and some other components. This would allow them to listen to their environments and develop simple song compositions from what they had heard and not what was just programmed into them. They continually learn new songs by listening to other robots and people who play songs on the 3-button synthesizer (as seen in the video). However, they can evolve their own songs without human interaction through a boredom and interest algorithm which consists of entering a compose state once a song has been played multiple times. Composing consists of taking a song from its song memory and altering a note at random to generate a new song.

This 3Pi was modified to use a ‘slave program’, and external components.
Note that the 3Pi turns at a constant commanded 72 deg/sec, as it adjusts its radius for the varying commanded speeds.

Oh no! I hope what I guessed didn’t actually happen. Where is that video taken at? What is Monsterland?

I perceive two outcomes: one, it falls off the edge and (somehow) breaks (which I find rather unlikely considering mine went full speed at a 4-foot drop and survived), or two: the bottom contacts the metal bridge and gets the chips shorted out.

Either of these correct?

Where is that video taken at? What is Monsterland?

And yes ups …about the metal plate I had not worried too much …
And …as I´m not masochist …I was almost sure that I can stop 3pi via IR remote control. 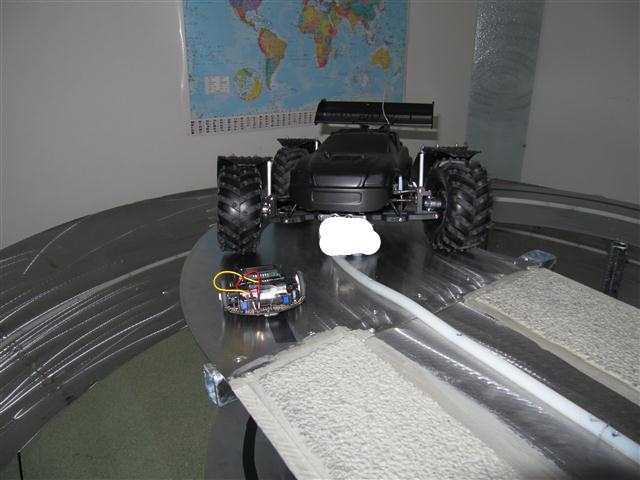 Who have source code for 3pi from


Download link for source code in that page is invalid

I made that program and video a few years ago! The code should be on my home computer somewhere, so I will see if I can find it and put it up somewhere soon.

I put the source code up on github here.

I thought it would be interesting to share a project with you guys. Me and some friends made a project in mechatronics where we studied how to control autonomous robots collectively. For the project we used m3pi robots and wixel units attached to them for the wireless communication. We made a Java program which calculates optimum routes for each robot and schedules them. The scheduling process is based on the A*-algorithm. To avoid deadlocks and collisions we use autoamata theory and a Java API called Supremica developed at Chalmers University of Technology in Gothenburg Sweden. The m3pi has been programmed to detect intersections by determining if the color of the road is black or grey. A grey road is intepreted as a intersection. When an intersection is reached a signal is sent from the robot to a computer running a scheduling program. The program then determines whether the robot is allowed to proceed with its scheduled route. A video link has been added below where some runs are made.

Feel free to ask any questions you have about the project.