I’m trying to fire up a balboa robot I purchased a year or so ago on Windows 10. I’m following the User guide section 5.2 on Programming using Arduino IDE. Everything in section 5.1 seemed to go just fine (The COM port shows up in Device Manager as “Pololu A-Star 32U4”).

However, when I go to program balboa (using Arduino 1.8.12), the uploading… message just stays up for a long time until it times out. Everything else seems okay: Arduino/Tools/Board:Pololu A-Star 32U4, Arduino/Tools/Port is set to the Balboa (which says “Pololu A-Star 32U4” next to the port name), the Balboa LED13 goes from fast blinking to slower pulsing, which makes met think it’s dropped into bootloader mode, … but Uploading never finishes.

I am sorry you are having trouble with the Balboa 32U4 robot. I will need more information to figure out what is happening. In the Arduino IDE, please open the File menu, select Preferences, click the checkbox to show verbose output during upload, and then click OK. Then try uploading to the Balboa 32U4 again. After it times out, please post the entire output from the Arduino IDE.

Also, what is the exact name of the port you have selected in the Port menu?

Could you provide screenshots of the Device Manager so I can see what is happening before and during the upload attempt? This will help me see what COM port your Balboa has been assigned to, and whether the computer is detecting its USB bootloader properly. Please make sure the “Ports (COM & LPT)” section and “Other devices” sections are expanded (if they are present).

Here’s a screen shot of the device manager. All looks well to me: 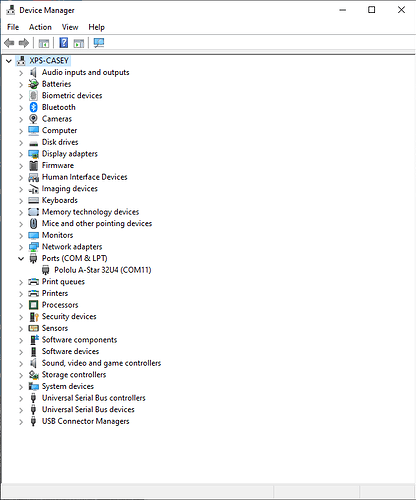 Here is the output of the programming attempt with verbose output on:

While the Balboa is in bootloader mode, normally there would be a new COM port with a different number representing the bootloader. But the debug output from your Arduino IDE shows us that the COM port for the Balboa’s bootloader never appears. When the bootloader times out and the Balboa goes back to running the sketch, COM11 reappears. (The Arduino IDE then guesses that COM11 might be the bootloader, so it tries to upload your code to it, but the sketch is not designed to respond to any of the commands from AVRDUDE so that does not work.)

Could you look at the Device Manager carefully during the upload attempt, and provide a screenshot of it so I can see what is happening? Please make sure the “Ports (COM & LPT)” section and “Other devices” sections are expanded (if they are present).

Hi David. Your explanation seems to be exactly what is happening. When the upload output is repeating “PORTS {} / {} => {}” the Pololu A-Star 32U4 has dissappeared from the device manager. No other devices show up under Ports or Other devices (both of those categories are missing during this phase). After that the COM11 port returns, Arduino tries to program that port and the upload files. So, the bootloader never appears. Can I update the bootloader somehow? 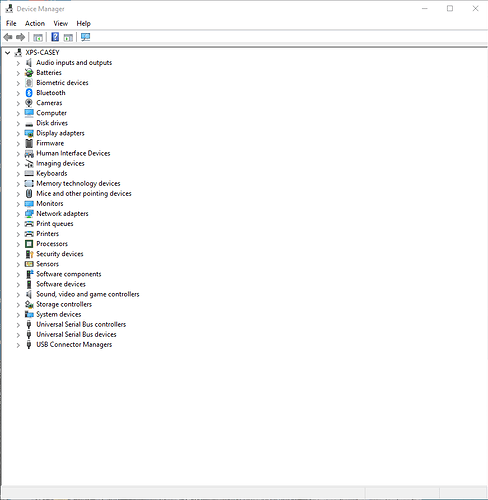 It is possible to re-flash the bootloader with an AVR programmer but I do not recommend doing that yet. Since your robot’s USB connection is working at a basic level, and the bootloader is running (as indicated by the slow pulsing LED), I suspect there is an issue on your computer preventing the bootloader from using its correct driver.

I think we should see if the computer recognizes the bootloader at all. In the Device Manager, please select “Pololu A-Star 32U4”, then open the “View” menu and select “Devices by Connection”. Please take a screenshot so we can see what USB controllers and hubs the Balboa is connected to. Then, during an Arduino IDE upload attempt, please take another screenshot so we can see what kind of device (if any) appears in that same place to represent the bootloader.

Here’s a screen shot of device manager, in Devices By Connection View normally: 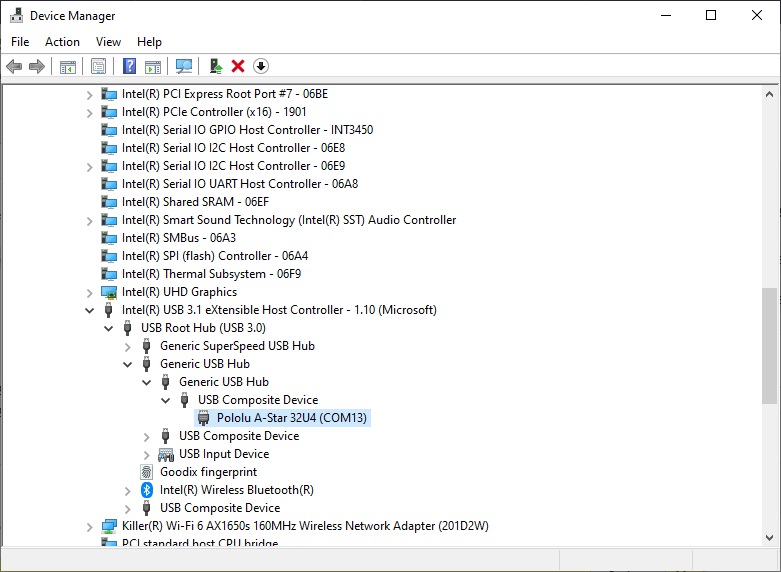 During the upload the Balboa entry dissappears and nothing else seems to take it’s place: 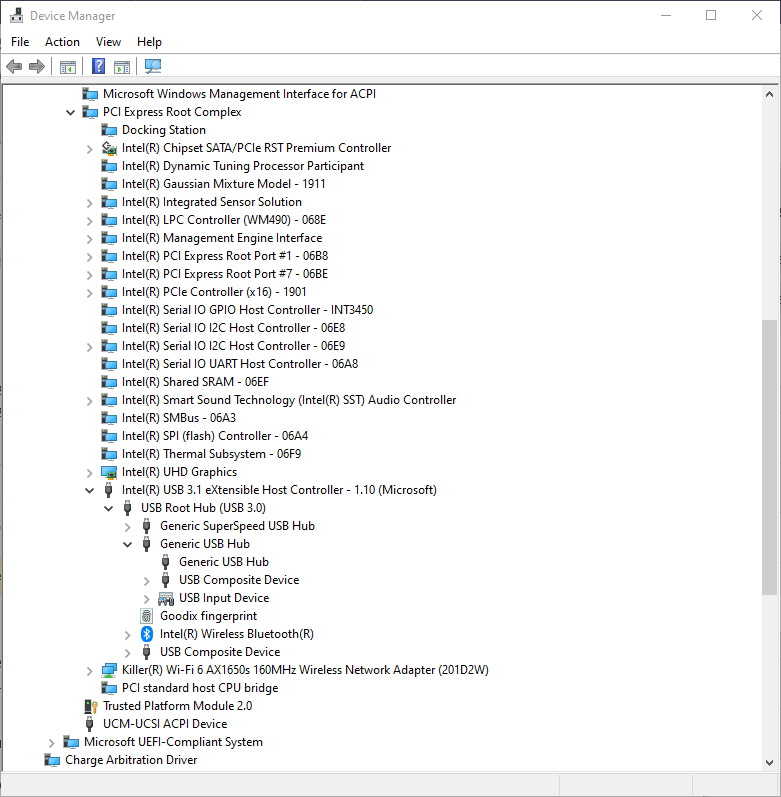 The behavior is unchanged: still can’t upload blink (or anything else). Thanks.

Thank you for the screenshots. It looks like there is no device appearing to represent the bootloader. It also looks like your Balboa might be connected to your computer via a chain of two USB hubs, though it is hard to be sure. Can you try connecting the Balboa directly to one of the USB ports of your computer without using any hubs if it is not connected like that already? When the Balboa is connected directly, do you see any device in the Device Manager during the upload attempt that might represent the bootloader? Could you try a few different USB ports to see if that makes a difference?

Were you ever able to upload to the Balboa successfully before? Do you have another computer you could try?