Hi all I was wondering if anyone knew if two wixels (one used as a receiver and the other as a transmitter) are capable of communicating wirelessly to control a servo. I understand that one would probably have to have some sort of usb connection, but I purely want that connection to serve the soal purpose of only supplying power to the decive. im sure i could hookup a multiple battery packs to supply power to both wixels but what im trying to do is control a servo with one of the wixels transmitting data to the other without any connects to a lap top or smart phone. Is this possible with the wixel? And has anyone done anything similar to this?

Yep, I’m doing it. Master Wixel connects to the host (in my case a Raspberry Pi) via USB, then it can control up to 64 Wixel slaves, each slave has 6 servos and returns 3 analog inputs back to the master. Don’t really want to give it away but I’m considering selling the s/w and I have breakout boards available. 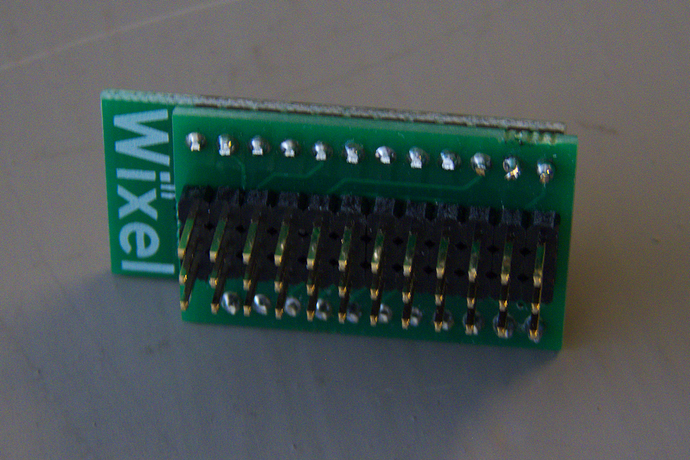 That’s awesome thanks for the help! Do you by chance know of a website or something that could show me the steps to hooking up the wixels to control a servo? I’m sure I could figure it out if I were to hook it up to an arduino or rasperry pi but its nice to have a how to.

It’s more of which libraries you include from the SDK. There is a servo library and several comm libraries/examples to choose from. You will also have to add the serial/usb library for the master. You will have to combine these yourself, there isn’t an out of the box solution.

As far as physical connections, they are detailed in the servo code comments and give the pin numbers etc. Using all 6 servos leaves 3 analog inputs free. I’ve tested this extensively and it works quite well. I’m getting a good 50-60ft of range outside. My application is setting garden scale model train turnouts and assorted animatronic things and this does the trick.

I setup my breakout board h/w like a standard R/C rx module, the center pins are vcc with the two side pins gnd and signal. I bring out all of the servos, the analog inputs and the ttl serial rx/tx lines. The servo power pins are from the main input power, the analog power pins come from the 3.3v power of the Wixel.

Anyhow, with a good power supply, I can get the Wixel to drive a servo over 100 ft of twisted wire which is a bit ridiculous! I love this little board

Oh man that’s such a great project! Good luck it sounds like you really know your stuff. Thank you for your help this is exactly what I needed to know! I just wanted to make sure that the
Wixel was the best babg for my buck as far as options go and I’m
Very excited about buying an testing these little guys and operating them at their max potential. Thanks again!

And just so I can understand I could program a wixel to take the values coming in from something like a potentiometer and have them sent to another wixel that was hooked up to the servo without having that control capability come from a smart phone or computer, right?

Yes. Mine are completely self contained, if you apply power to the master and slaves, they talk, regardless if a host is attached to the master Wixel. They don’t say much without the host, just zeros, but the comm link is always on.