Wireless Programming of a Baby Orangutan 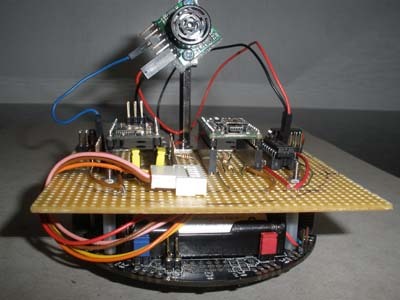 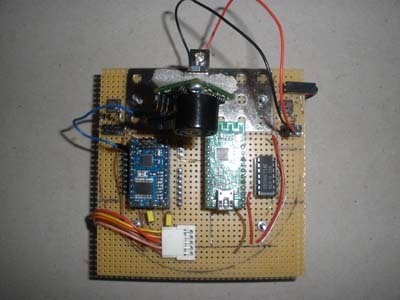 The idea was to allow wireless programming of a baby Orangutan.

To do this, the standard Arduino bootloader was modified for 20Mhz operation and a new section was added to boards.txt in the arduino hardware folder to allow selection of the orangutan.

The bootloader was uploaded to the baby Orangutan using AVR Studio 4.

2 Wixels are used, 1 attached to the PC and the other attached to the Baby Orangutan’s UART.
The Wixels are running the Arduino Shield Program set to 57600 baud.
A section of a hex inverting buffer is used to operate the Orangutan reset during programming.

The Orangutan can be programmed wirelessly from the Arduino IDE.

In this particular case, the 3pi has the serial slave program on it and is contolled by the Baby Orangutan using the Arduino Software serial function at 19200 baud.

Very nice! I am glad you got everything working so well. If you modify the Wixel’s app you should be able to get rid of the hex buffer.

I thought about that but I was concerned that the Atmega328 reset is internally held at Vcc(5V) and the Wixel is not 5V tolerant.

I’m not sure what the consequence would be so used an inverting buffer which has the added advantage of inverting the signal to the required output.