Robotics and electronics discussion Share your projects
shimniok January 22, 2008, 3:19am #1

Working on a prototype for a firefighting robot so I can try out some different sensors, code etc. It isn’t much at the moment, nowhere near done (will post updates here and on my blog) but… its red

Anyway, a little more here on my website: bot-thoughts.blogspot.com/

The final version will be differential steer with larger wheels more centrally located, but the goal here was to build uber-cheap with parts on hand so… here we are.

Thanks for sharing your project. I’m very interested to see how it turns out!

well, after fighting with brown out resets on the BS2 when trying to power the motor, and having no luck with the servo, I managed to get both resolved. Fits and spurts.

So, the servo is back on and under MCU control, and the motor can now be powered up and controlled with PWM. Just have to tie the board and batteries to the bot before burning rubber. More later…

Got Sparky rolling on his own under power by a BS2. This answered my questions about motor/geartrain performance. So I put in an order to the good folks at Pololu just now for an Orangutan LV168, Tamiya gearbox, tires/wheels, and a few other goodies so I can start building the competition bot. Very excited to get started on the “real” firefighter…

Purely for entertainment purposes here’s a video of the build / test:

The production quality of your video is FABULOUS! Please keep these up throughout the build!

Thanks much! I have (way too much) fun making the videos, what can I say?

I was going to build the motor control and everything else entirely from scratch but a guy’s gotta know his limitations I guess. I think the Pololu LV168 setup is going to be far more reliable and let me concentrate on sensors & software.

Where is the time going??? I am getting a little freaked out by how much is left to do. But the Orangutan LV-168 is great and programming on a Mac is superb. Sparky continues to be a very useful prototype. Here’s what I’ve been up to.

Quick question – I am getting ADC noise with the motor on – what can correct this, cap across the motor leads?

I have a Sharp GP2D12 heading my way hopefully today so I can mount it and the flame sensor on a servo and work on the navigation and flame detection software tomorrow at the local club meeting. Meanwhile I’m anxiously awaiting the arrival of my “secret weapon” in the mail…

Nice video! Noise is generally a problem with the Tamiya motors, and the switching regulator on the low-voltage Orangutan can make things even worse. You definitely want to put three caps on each motor: one across the leads and one from each lead to the case. Try to keep the wires going to the motor as short as possible and as far away from your analog signal wires as possible. It looks like you might already be doing it, but twisting the motor wires also helps.

If you can afford to do lower-frequency sampling of your sensors, the next things I recommend is averaging several samples (or something like that, depending on how much processing overhead you have). For some powered sensors, it can help to put bypass caps right on the sensor power inputs.

Looking good! And especially good job building testbeds for everything, instead of trying to cram everything onto Sparky at once. Good luck, 30 days is not a lot of time!

Thanks for the replies. Jan, thanks for the help on noise, really appreciate it. I’ll give each of those things a whirl. Hopefully the caps on the motor(s) will help.

Well, poor Sparky has been decommissioned and mostly disassembled to make it possible to build the competition robot, Pokey.

I’ve been working on that the last few weeks and it’s now mostly done! (ok, it needs paint, I know…)

I settled in on using a lantern flashlight reflector and IR LEDs for flame/heat sensing pointing backwards. That way the robot can scan and then back up to the flame in a straight line from the doorway, then simply move forward in a straight line back to the doorway once the candle is extinguished and continue back home. If there’s no candle, the scan ends with the robot pointing to exit the room and continue the search.

An Op Amp amplifier is mounted to the back of the sensor (front of the bot). After some fussing around with the layout I came up with a 3 deck arrangement, with the Orangutan LV-168 sitting on deck 2 in the back (have I mentioned lately how happy I am with the controller?

The dual motor gearbox + tires sit on deck 2 along with the batteries (above the motor). The oddball servo-mounted ranger array sits on the front of deck 2 taking up a load of real-estate but it works for short or long range sensing and can look left or right while watching for obstacles up front. Wall following prototype code is done and works pretty well. I still need to make the floor sensor.

Now it is a matter of doing a ton of coding. And figuring out the water-based fire suppression which continues to be a challenge.

Pokey definitely had the nicest, smoothest motion of all the bots in your video. Any plans for revisions for next time?

Though Sparky is in pieces, Pokey – his successor – did ok in the comp and I do have some plans for improvements.

Speaking of video, here are excerpts from the competition I threw together.

Anyhoo… my club may do a competition later (April? May? I dunno)… I have some plans for Pokey to be sure… because I want to crush the competition this time.

His main problem is wall following. I had to slow him down (hence the name) and didn’t get around to adjusting the wall following… so he couldn’t reliably orient parallel to a wall or end up in the corner of the room upon entering-- both are foundational to the rest of the navigation working really well.

That’s the critical stuff, I guess.

And… while I’m at it, if I can get the navigation working consistently, I am going to try speeding him back up. He was definitely the fastest of the crowd even in his intentionally detuned state… but he’s got a LOT more under the hood.

I thought you might like to see, PopSci has an article up on their website (finally! it was in last month’s print edition) about a cool autonomous forest fire fighting robot (concept, oh well). 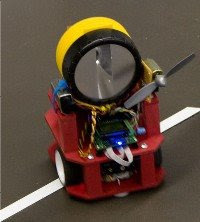 On another note, I was able to get a 100uF cap back on Pokey’s LV168 board – and didn’t even scorch the board too badly

Replaced the battery tray and did some reinforcing to prevent another wire failure. So… I think Pokey is mechanically sound again!

I’ve been holding off on much else until they announce the next FF competition since I have a lot on my plate these days.