Hi, my Qik has been running perfectly fine for about a year now, but all of a sudden it won’t turn on. So I took it out of its enclosure and found that one of the traces blew on the bottom of the board. What would have caused this? Is this a problem with your board? Can it be replaced? Attached is a picture of the blown trace. Is it possible that I can fix it? I would really like some light shed on this issue. Thanks. 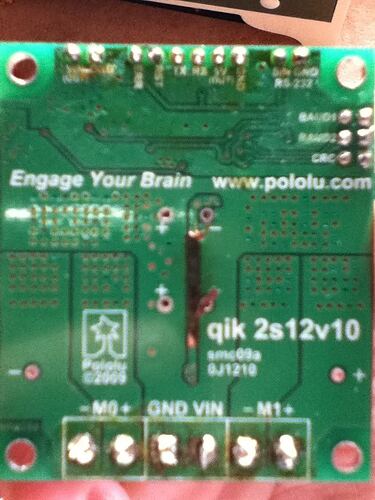 That trace is a ground trace that connects the terminal block ground and the bottom of the picture to the grounds for the circuitry and connectors at the top. That the trace melted suggests that you either shorted something out on the top portion of the board or tried to draw too much current up there. The trace should have been good for several amps, so if you don’t think you were drawing more than that through there, it was probably a short.

Fortunately, you should be able to just reconnect the broken trace with a wire to repair your board.