Ok, so I have two questions that I will pose in the same post:

I don’t have any real experience with potting anything, so I don’t have any good recommendations as far as materials. However, make sure you consider thermal issues well, especially if you are thinking about larger currents in your board. You might want to mount some heat sinks to the parts of your board that generate the most heat, and then encapsulate your module.

There are various sites that give you the current capacity of PCB traces (just search for something like “pcb current capacity”). You can easily make things not work well when you are talking about 10A currents, so make sure you pay careful attention to what your actual current paths are. You’ll want your traces to be as wide as possible, to the point that you are defining the perimeters of the areas, not the centers of conventional traces (see something like the back of the Orangutan LV-168–the higher-power stuff is on the left side of the picture). You should definitely get at least 2 oz. copper, and spread the currents (and heat) across as many layers as you can.

Thanks Jan. I will inquire elsewhere about potting. And I will look into getting heatsinks.

About the PCB - right know I have it designed in the free CAD program supplied by Pad2Pad. I made the traces 3.81mm wide with 2 oz copper, and I’m wondering about the ampacity. I have gone on the online calculators, and they output a 9mm trace width. I will not be using these traces for any extended period of time (1 hour at the most), and during this time period, the usage will be sporadic. Does this reduce the requirements?

I finally figured it out after scrutinizing the image you posted. I have revised my PCB design, and I was wondering if someone could take a look at it. I basically made the entire second layer ground and etched around it where there are holes. I made the entire top layer power, and etched around it where there are other connections - such as motor traces and signal traces. The main power and ground lines will be carrying up to 10 (maybe 15) amps, while the motor lines will have a MAXIMUM of 5 amps, probably more like 3 amps, going through them.

If anyone would be willing to take a look at this for me, I can email the file - it’s a “.pcb” file made in pad2pad.com’s free CAD software.

Can you post a picture here rather than make someone install some program?

An hour is a long time for relatively small electronics. Peak current ratings are often given for fractions of seconds, and unless your board is very large, it’s likely to get very close to a steady state (i.e. get as hot as it’s going to get) within a few minutes.

Yeah - I’ll post pictures of each of the two copper layers:

Power/Signal layer:
The red ocean is all power. The etched pathways are various signals. 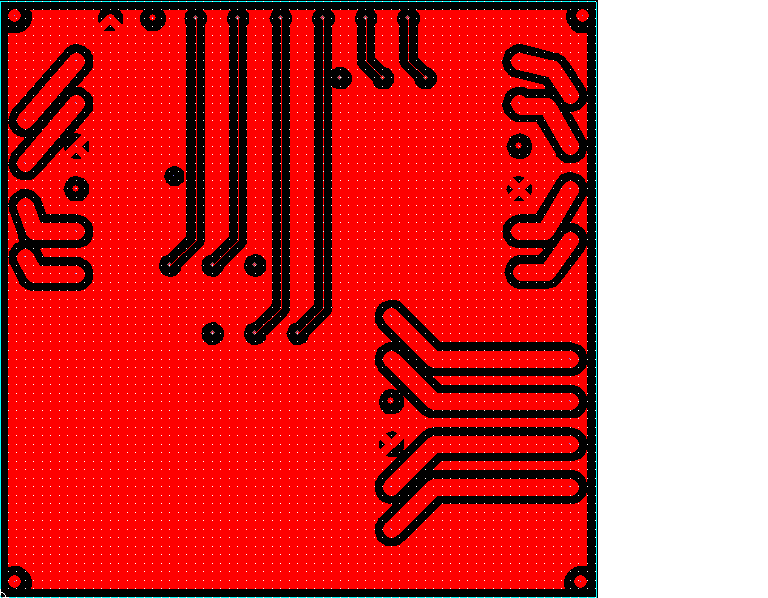 Ground Layer:
It is all ground. 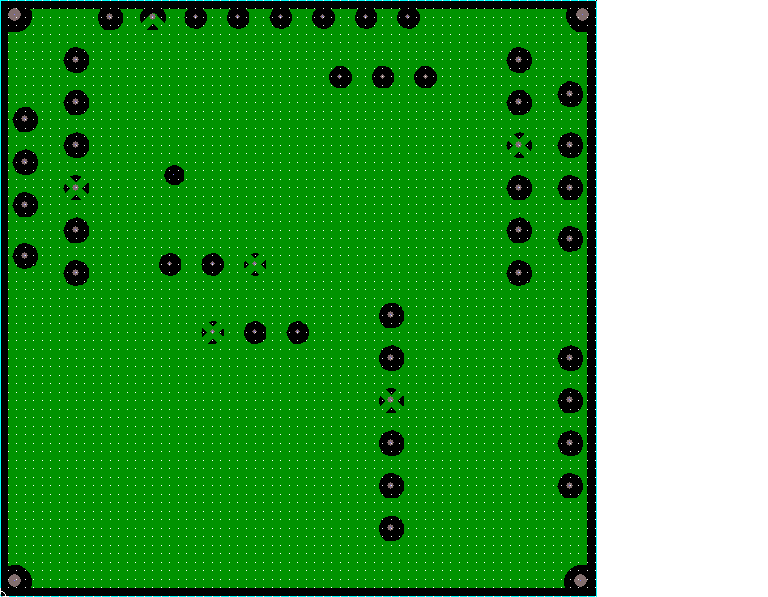 Is it just a 2-layer board? If so, it doesn’t look like there’s too much to it, and I’d question the value of it if you’re not making a whole bunch of them. The green layer looks like it has to be optimal (if you can’t move your part locations), but you might want to reconsider the thermal reliefs around the connected pads. It shouldn’t be too much more difficult to solder the pins in (and if it is, it would be an indication that you are getting some better heat sinking!).

The red layer could easily be made much better. You have many locations where the traces have copper fill between them that is not carrying current, so you can make those traces wider. Also, you can move the traces a bit and almost double the width of the fill in the narrowest point indicated in the attached drawing. 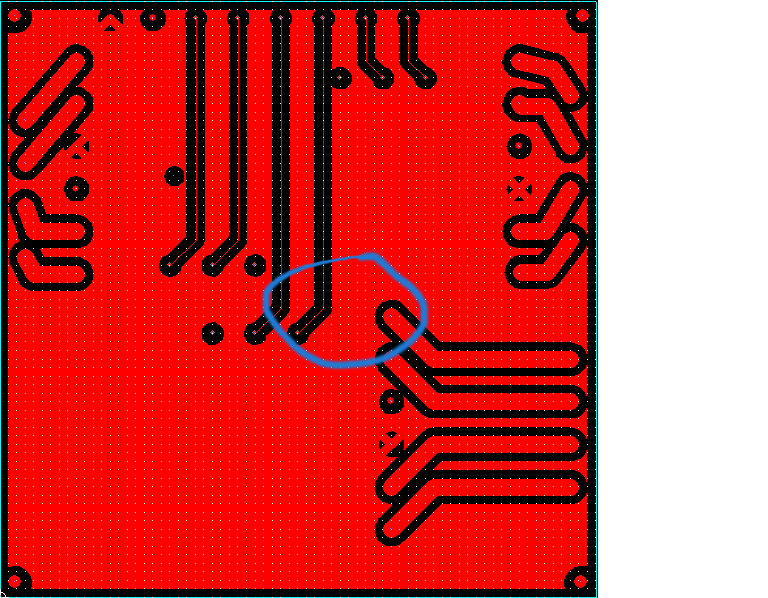 Yes, it is just a two layer board; and yes, it is very simple. I am not sure what you are talking about when you talk about the “thermal reliefs” on the green layer and what you mean when you say the green layer has to be “optimal”. This is my first PCB, so I’m not tuned in to the lingo.

About the red layer - when you say I could make traces wider that have copper in between them that is not carrying current - The six small traces that terminate at the top of the board are signal connections, so they do not need to be large. Are you saying I should eliminate the copper in between them if it is unnecessary? I will work on making that space that you circled wider.

The thermal reliefs are your X-looking connections from pins to the copper plane. You have them on both sides. It’s probably an option in your software for how to connect to your plane.

The “optimal” comment has nothing to do with PCB lingo. If you can’t move the pins, and you have the whole layer filled with ground, you can’t possibly make it any better: it’s optimal.

For the trace widening, I’m talking about the power traces. For instance, the ones on the lower right. You have these islands of unconnected copper that aren’t doing anything for you; you could instead widen the traces. In the 45-degree part of the traces, you have them as close together as they could be, but you can change the location of the bends to have wider traces. Also, it looks like you can do arbitrary angles, so you could just go straight from pin to pin with the fattest possible trace.

Thanks a lot. I will go ahead and see what I can do with those changes and then post the results here for some more scrutiny, if you wouldn’t mind taking another look.

Alright - so I’ve gotten rid of the thermal reliefs. I just filled it in. The thing about the traces being wider - those traces will only need to carry 3 amps, 4 at the most. According to the amp calculator I used, they are plenty wide. Same with the narrowest point you were talking about - it is must wider than the width calculator said. Do you have anything else to critique?

I’ve got nothing else. However, without a decent reason, I think it’s dumb not to take the 30 seconds to move the traces a bit and get a substantially more optimal design.

Alright. Thanks so much!

The only thing you guys are lacking is experience in this field, but you are getting there, If you have found us sooner you could have won first place.

About the amperage of the boards, you jumping from 2.5 to 13A. I’d say that’s over kill but you will be on the safe side. I think it would be expensive.
The resin you told was great, it would help you to seal the PCB.

How about sharing your bot as a CE project. You could make a thread in the mini project and explain all the do’s and don’ts.
But I guess that will be after the competition.

That helps explain that post! I was wondering if it was some kind of spam that linked together different sentences from other threads.