Not so much intrinsically Maestro related, but I figure other Maestro users may have encountered this

I have 10 digital servos (all 6v capable and of various but reputable brands) plugged into my 18 channel Maestro - they are powered via the VSRV line which is powered by a DC benchtop supply set at 6v and at full current allowance - the unit is rated at 5A continuous.

If I run all servos at once under moderate load and speeds the supply seems to cope just fine with the current demands.

However, to get it into a running state I have to plug the servos in after having switched on the supply. If I switch it on with all servos plugged in (even if they are at their home positions already), the supply will say it’s providing 2.7V at 5A (or whatever I limit the current to on the supply) and the servos wont operate.

It is only when I disconnect around half of the servos before powering the unit on that it will go straight to 6v and display a nice and expected low unloaded holding current when I switch it on (mA’s). I can then plug the rest in one by one, and the supply and system operates as I would expect it to, that is, until I switch it off again and the problem starts over.

I get similar behavior with a 6V wall-wart power supply - although I get slightly different numbers probably as the current is limited to 2A on that particular unit.

Questions:
~ Why the 2.7V and seemingly damaging currents upon switch on ?
~ How to get around it? Maybe some kind of electronic version of the ‘slowly adding the servos’ solution ?

It sounds like your servos or power supply might have some start up characteristics that are causing the problem. Is the Maestro commanding the servos to go to a position as soon as they are powered up? You might try making sure none of the Maestro channels are sending a signal before powering the servos. You can do this by going to the “Status” tab of the Maestro Control Center and unchecking the “Enable” box for each servo before connecting power for the servos. Please note that if you are using a script, you might need to go to the “Script” tab and make sure it is not running (when it is not running the “Run Script” button should be green). Also, if you are powering everything from a single power supply, you might need to disable to “Run script on startup” box, also found in the “Script” tab. If this fixes the problem, you could try adding a delay to let the power supply boot up before the Maestro sends commands to your servos.

By the way, we typically recommend budgeting around 1A per standard size servo. An alternative solution might be powering some of the servos from one supply and the rest from another. The Mini Maestro’s servo power rail can be split into banks for doing this. The dashed lines in the diagram below show where the power rail trace (VSRV) can be cut from the bottom of the board: 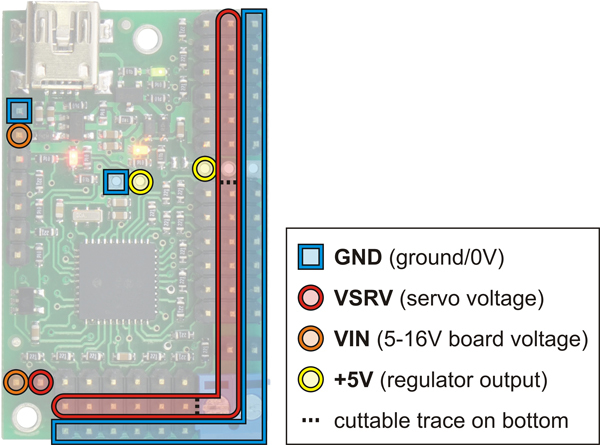