I’m trying to use the example code, but for the life of me, can’t get a response out of the shiftbrite. It’s getting power and I know it works b/c I tested it successfully with an Arduino. I’ll attach a pic and the code. Any thoughts? 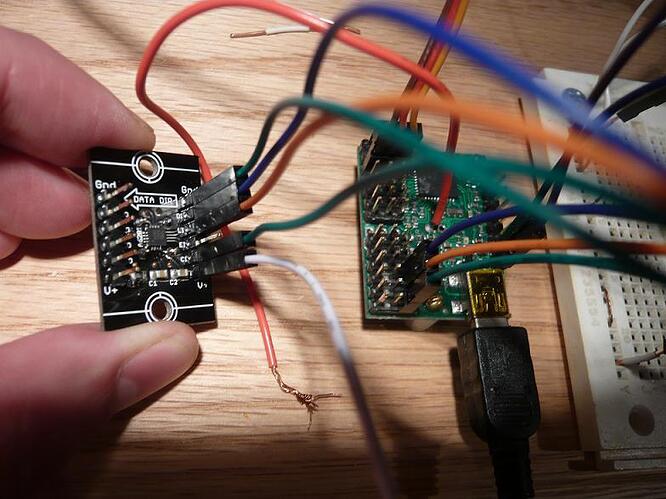 I see that you have not connected the EI (enable) pin. It needs to be low for the ShiftBrite to do anything.

Bingo. For some reason, I thought it was optional. Thanks, I’m trying to learn bit banging techniques for some of the longer strings out there. I’m hoping to run a string of 4-10 programmable LEDs off of the maestro this way.

Question, could a single Mini Maestro run 4 programmable RGB LEDs through a rainbow of colors and simultaneously monitor 4 pushbuttons, alter (or “freeze”) the colors as the buttons are pressed? And then also throw a single servo in the mix as well? Or would I need two boards?

Great - I am glad that it works for you now.

I obviously have not tried that myself, but I bet a Mini Maestro will be able to handle all of that, but it will be quite a challenging programming task. This kind of thing is tricky, because even though it is natural to describe it as four things happening in parallel, you are going to have to reduce it to a sequential program. Please let me know how it goes, and feel free to ask if you need help along the way!