I have some LED motion sensor lights that use 4 D size batteries that I use at a cabin, they draw 143mA. I want to hook these up to my 24v battery bank. I ordered some D24V5F6 voltage regulators (6V, 500mA Step-Down). I tested the lights using the voltage regulators with a bench top power supply and used something like 100v 50μF electrolytic capacitor to protect the regulator. The lights and regulator worked fine. My cabin is connected to my batteries with 2 sets of 10 gauge cables run in parallel about 140 feet long (I needed larger than 10 gauge but already had a bunch of 10 gauge landscaping wire so I just double it up). My question is how large of a capacitor do I need if I’m connecting these voltage regulators to these long large cables? Or even better how to I calculate it?

We are missing some details about your system, like why you are using such huge cables and what you are powering with your battery bank, so it is difficult to determine how much capacitance you will need. You will probably have to test the regulator and LED motrion sensor lights in your system to determine what works. You might start with a few hundred uF.

The battery bank is four 6v deep cycle batteries connected in series to power lights in my cabin, which is 140 feet from my battery bank – if you’re asking why I just don’t move the batteries closer to the cabin it’s because the cabin is in the trees and the batteries are next to the solar panels which are in a clearing in the sun. Two 10 gauge (5 mm^2) wire equates to about a 7 gauge wire (about 10 mm^2). So with 2% lose I can still only push 2 amps at 24vdc or a whopping 48 watts. Anyway there is a path along which this cable runs that I’m going place these motion sensor lights, each of which pulls about 143mA.

It is unclear to me how you calculated 2A for 2% loss in your system. With a single 10 gauge wire, the resistance of the wire is about 1mΩ/ft, so with a 280ft cable (down and back), the voltage drop across the cable flowing 2A would be about 0.56V, which is about 2.3% loss. Also, where is the 2% threshold coming from? With something like our regulators, you get some of that efficiency back when their input voltage is lower. Anyway, it sounds like you already have it all installed, and the fact remains that the bulk of your system power is going to the lights in your cabin, and we are not sure how they would interact with the cables and what kind of voltage fluctuations there would be. Still, a few hundred uF at the inputs of the regulators will probably be fine.

I used this wire size calculator:

I’ll try using 470uF @ 100v. I don’t have an oscilloscope to see if there are any voltage spikes or anything so we’ll just have to see if they fry or not. Thanks for your help.

Good luck on your project. Feel free to let us know how it goes.

There is something i did not really understand.
I have also followed this doc

but you add :
“but do very little to dampen LC oscillations”

so there seems to be two phenomena that need to be reduced :

The article above clarifys a little bit this something else

ESR limits the current in and out of the capacitor. Low ESR allows the capacitor to give a lot of current to the local circuit if it needs it, which is generally good. (The “something else” “pheonomenon” in your second bullet point is your circuit not working because it did not get the power it needs.) However, low ESR means that the capacitor can also draw a lot of current when you initially apply some voltage to it, and when you do that with long wires, that’s where you add inductance to the system and get the oscillation problems. You don’t “require” large ESR to deal with that; there are several other things you can do. It’s just that low ESR does exacerbate the problem, and if you don’t need it that low, adding some back can be the easiest way to balance keeping the oscillations good enough while also keeping the power to your circuit good enough. 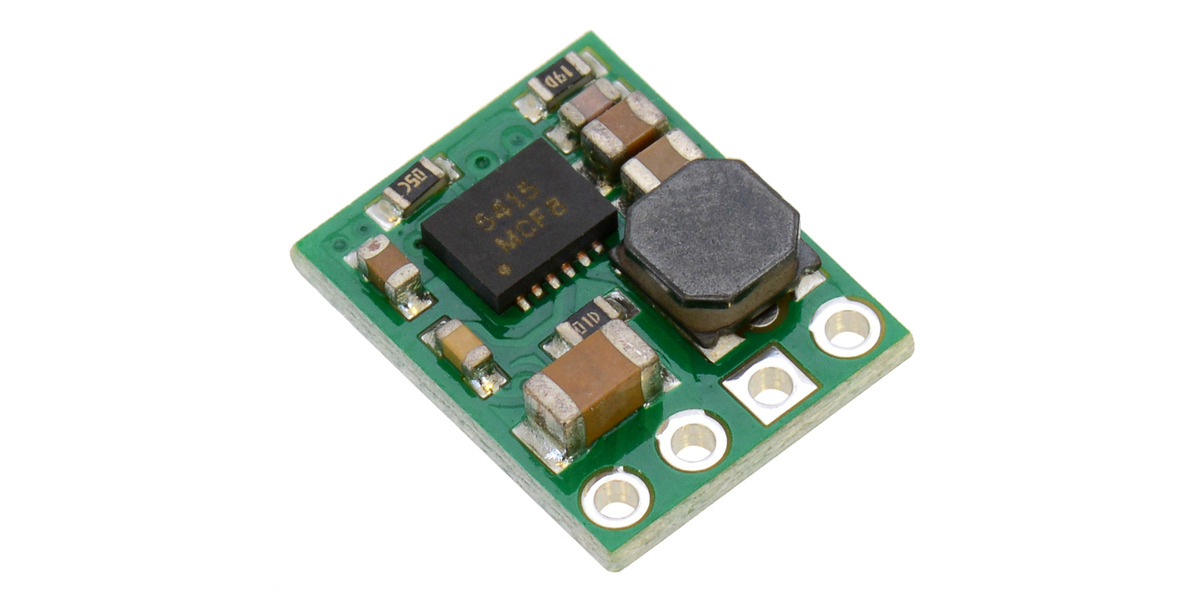 The compact (0.4″ × 0.5″) D24V5F6 synchronous buck voltage regulator takes an input voltage of up to 36 V and efficiently reduces it to 6 V while allowing for a maximum output current of 500 mA. This regulator offers typical...


and use it to feed an arduino from a Lipo 4S (16.8 V max) in a quadcopter.
At the end of your page there is the recommandation:

“If you are connecting more than 20 V or your power leads or supply has high inductance, we recommend soldering a 33 μF or larger electrolytic capacitor close to the regulator between VIN and GND. The capacitor should be rated for at least 50 V.”

Though my Voltage is lower than 20V, i’m still wondering if with ~ 15cm leads (typical breadboard wires) it would be more cautious to add the electrolytic capacitor in parallel with the polulu regulator … ?

For your system, you probably do not need to add an electrolytic capacitor, but adding one would not hurt either, so if you have space for it, you might add it just as a precaution.

I have a Pololu 6V 2.5A step down regulator D24V25F6. VIN connects to 12V solar panel and OUT is connected to a CN3065 lithium battery charge module using a 2.3 metre cable. 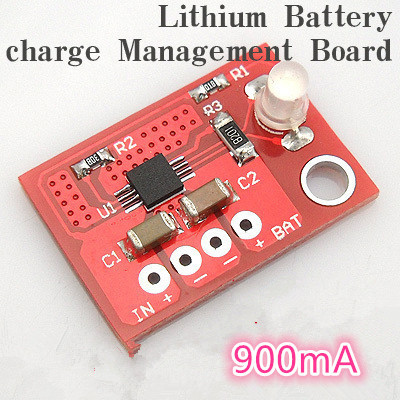 In my project, I am finding that the CN3065 boards are experiencing problems after a few weeks of use. Normally the CN3065 would stop charging the lithium battery once the voltage reaches 4.2v. But after a while the boards are supplying higher voltage (approx 5v) to the battery. This is a problem as these batteries should not be charged higher than 4.2v.

The datasheet for the CN3065 states that the maximum input voltage is 6V which the Pololu regulator is providing, so I am wondering if voltage spikes on powerup could be damaging the CN3065. There is a mechanical switch near the lithuim charge module to switch power on/off.

It is always a risk to run at the “maximum input voltage” of a chip. The slightest spike on the input will exceed that voltage.

I suspect that your use of 6V input to the charger is the major cause of the problem, and suggest to use a 5V regulator instead.

A post was split to a new topic: Problem with electrical fault in UPS installation

A little schematic I want obtain: 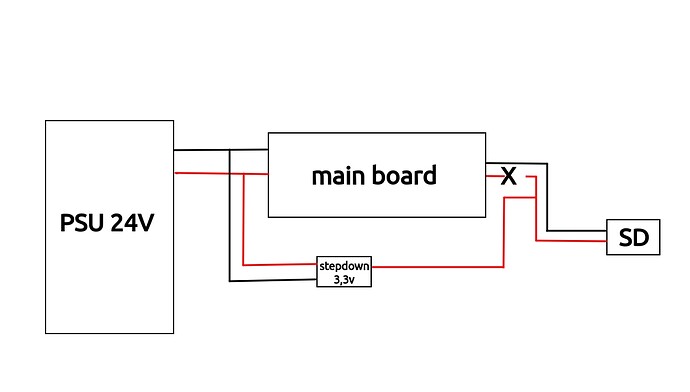 I have tested as-sis, but in some times i get the SD card power down and the printer blocked (same behavoir if start the print and unplug the SD card)

my question is, if i add the capacitor as described in the post and replace the possible faulty step down i can fix my problem?

Using the regulator you mentioned with a 24V power supply and no electrolytic capacitor could have caused an LC spike that damaged the regulator, so if you had your system configured like that and it is not working, you might try to replace the regulator and use an electrolytic capacitor this time. By the way, if you have access to a benchtop power supply with an adjustable voltage, you could try powering the Flashair module you mentioned with 3.3V from that to see if it works. Also, you might try powering the regulator with a 12V supply and testing the output to see if it provides 3.3V with no load.

thanks for the reply and the suggestion.

I have recently fried two 3.3V regulators (S9V11F3S5C3), quite literally (the main chip on the bottom of the board molten). Could the voltage spikes be that destructive?

My setup is 12V (battery-backed PV system), long lines (10-15 meter), then the regulator and a 3v3 logic board (which uses 300mA max, but usually 30mA or less). Occasionally the system is switched on and off near the battery with a switch.

I’m reasonably sure my voltage never goes above the 16V maximum rating, so the voltage spike article seems like a good lead, but adding the electrolytic capacitors is going to be challenging space-wise so I thought I’d check here first.

A setup like that does sound prone to experiencing significant spikes. It is possible that an LC spike could have been the initial cause of damage, then continuing to try to operate the regulator after it was already damaged could have led to even more destruction.

However, it is hard to know what is really going on without actually observing it, so you should look at the voltages in your setup with an oscilloscope to be more certain.

Thanks! Looking at the signal with an oscilloscope is going to be challenging (this being a PV setup, there isn’t any 220V outlet anywhere near to plug in an oscilloscope, and of course on the workbench at home everything works just fine), so I guess 'll just add a suitably big capacitor and try.

A post was split to a new topic: Investigating voltage spike/surges in vehicles