Have just purchased the dual gearbox (Model No. 70168) and am planning to drive it using an L293D motor driver IC. The data-sheet of the L293D states the lower volatge limit to be 5V. However the gearbox’s motors run at 3V. How do I go about interfacing the gearbox to the driver IC?

You’re in a bit of a pickle if you have your heart set on sing the L293D, but only a bit.

If you’re really, really concerned about protecting your motors you could get a few 3V zener diodes, and put one in reverse bias between each pole of each motor and ground. Or, if you have a 3V line available, you can use regular diodes pointing from the motor poles to the 3V line. In either case, you should include a small, current limiting resistor in series with each diode. This way, if the voltage at any motor pole goes above 3V, current is shunted through the diode and the current limiting resistor, dropping the voltage the motor sees. This setup will always be wasting a lot of power though. Of course, the very best way to run these motors at 3V is to pick a different H-Bridge chip.

I know they’re described as 3V motors, but they won’t immediately explode at slightly higher voltages (the Pololu catalog page eve says 3-6V). Personally, I would just run them at 5V under whatever load you expect them to operate, and see if they get scalding hot or not. Has anyone here had a bad experience to running the Tamiya double gearbox at higher voltages?

Thanks. You are correct about the wastage involved by using zeners - which is why I have been avoiding them. Will try 5V as suggested and will also look for other controllers. Any suggestions?

Well, I guess that really depends on what you’re looking to be able to do with these motors (I’m guessing independent forward/reverse speed control on each) and what kind of controller/signal you wanted to use.

You might consider the SN754410, which can handle up to an amp and can work down to 4.5 V. We carry them at https://www.pololu.com/products/misc/0024/; you can see the data sheet there for details. These small integrated drivers are not the most efficient, so you might lose up to a couple of volts in them (up to 1.8 V per side, for a total of 3.6 V, according to the data sheet). Therefore, a 4-cell pack (4.8 V nominal) with one of these chips will get you around 3 V on your motor.

Also, 5 V is not a naturally-occurring voltage; make sure you’re not powering motors through voltage regulators unless your really know what you’re doing.

Thanks fellas! Adam you’d asked about how I plan to use the gearbox - yes - for fwd, reverse and sideways movement. The control signals would be from an 8051 family microcontroller. Plan to use an RF link.

I also want to mount a camera that would transmit images to the PC / laptop but have not explored that avenue yet - any links /suggestions?

One more query - I have two separate motros in the gearbx- great for 360 Degree rotation of the robot - but how do I ensure that it moves straight when I want it to - will I need encoders etc.?

Very cool, have you picked out your RF system yet? I’m assuming some sort of serial protocol radio modem relaying data from your computer to the on-board 8051 microcontroller?

I haven’t yet seen a super-mini wireless digital video camera that I’ve liked. There are wireless networked webcams, but those are pretty bulky, and probably too big for a robot running on that gearbox.

Since video takes up so much bandwidth the (my) general rule is that mobile robots that already have on-board wireless networked PCs get digital cameras, while robots running on just microcontrollers get wireless analog cameras. There are some very nice little analog cameras, and you can get a small USB video capture card to get the video onto your computer. Video quality depends on how much you’re willing to pay, and there is a whole spectrum (haha) available, but some usual suspects are:

For $80 bucks (camera & reciever) the video is still pretty lame! A lot can be cut/removed from the frame. 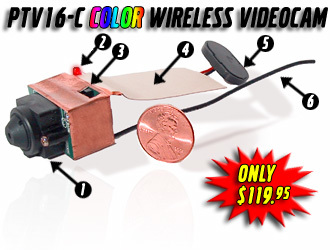 For $120, this is actually a pretty decent camera, and it transmits a UHF television broadcast signal, so you just need a broadcast TV tuner for a reciever.

For $250 you can get some seriously good video (comparable to regular TV), and an extra thousand dollars will get you a set of Video glasses!

As for your robot going straight, there’s straight, and then there’s straight. If you want your robot to go in a ramrod straight line across a large room, then yes, you will need encoders of some sort. I think you might be surprised, though, at just how straight you can get your robot to go just open-loop. If you’re doing PWM speed control (rather than just full forward, full reverse) you can even calibrate your speeds to account for the individual motor and geartrain characteristics. I guess I’m saying you should start with open loop control and see how you like it before you start shopping around for encoders. Also, encoders aren’t just about going straight, they will give you much more precise control of your turn angles!