To do position control, the jrk motor controllers need feedback from a sensor to control the position of the motor. For example, in hobby servos, the motor is connected to a potentiometer which detects the position of the shaft. Potentiometers are usually only good for less than one rotation of the shaft (or maybe a couple like on sail winch type servos). [size=85]If you want your motor to be able to spin around freely and have position control, you will need some kind of encoder. The jrk accepts feedback signals as serial, analog, or pulse width.
[/size]

edit:
I made the wrong parts of this post small and yellow.

Thanks Ryan!
This makes sense now. Do i need an encoder for velocity control or can I use a potentiometer using analog voltage?

nevermind… i figured it out
thanks again!!

What I said about an encoder is probably not going to work for position control, unless you have an encoder module that can output an analog voltage that corresponds to the position of the shaft. Also, what I said about feedback signal being serial or PWM is wrong. You cannot use serial or PWM commands for feedback control on the jrk. Please see section 3.c of the user’s guide for more details on the different feedback modes.

Are you trying to do speed or position control? You have asked about both. A pot is not usually good for speed control.

HI Ryan,
Thanks for those clarifications. I was initially trying to do position control but I noticed that speed control is more important ( I am doing a lot of experimenting on this project).
I was able to have speed control fairly easily by reading the user’s guide. The only problem i am having is adjusting the range of the pot to the speed. When I lower the max speed, I just get a max limit speed. The range is unaffected. I used the “learn” feature as stated in the user’s guide, but i guess i still have to work out a few bugs. I would like the max speed to be around 30% and move the pot so the limits would be 30% and - 30%. The way it is now is that it goes to 30% then as I keep on turning the pot the speed remains at 30%. There is no difference in the spreading of the range. I’m not sure if my explanation is clear.
Thanks

I put my previous post up before seeing your last reply, mgaribaldi. I’m not sure I understand your latest question, but it sounds like you need to change what the target gets set to for the learned max and min for your potentiometer.

Thanks Jan!
I’ll give that a try. I was confused by the video on the products web-site regarding position control but now it is clear.
Thanks again for everyone’s prompt replies! 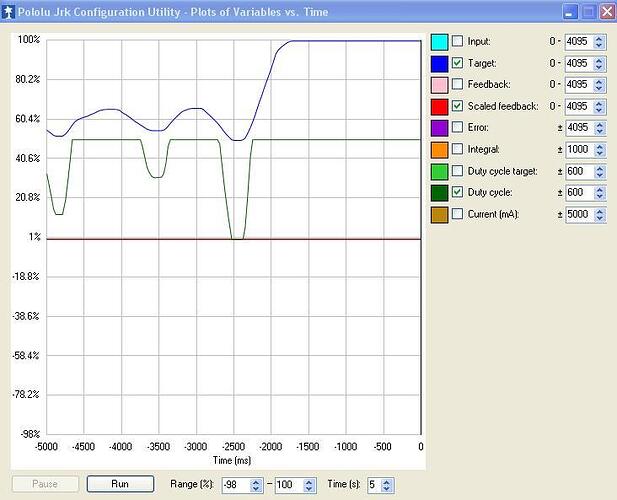 awesome it works!
thank you so much!

mgaribaldi: That’s good that you got it to work! In what way were you confused by the video on the Jrk’s product web page?

For anyone who was confused by this thread, it’s probably because we changed topics in the middle. mgaribaldi started by asking about position control, but what he ended up building in the end is a non-feedback system that drives the motor at a duty cycle specified by an analog input (from his potentiometer). Along the way, we also talked about velocity control and speed control, which are ambiguous terms which could refer to two things the jrk supports:

Hi David,
I was just a bit confused with the analog control portion of the video. It looks like there is position control. However, now i see that this is a servo motor, which explains how this is possible. I am using a basic DC motor, so i thought the video was just the driver and a small DC motor. I doubt other people would make this mistake. I am pretty knew to this but I am learning a lot through my mistakes and the forum.
Thanks again for everyone’s help and quick replies!