I smoked my A-star and now investigate

Below is a picture of my A-Star 32U4 Mini SV that i managed to smoke. You can see the damage on one chip, which I believe is the ISL85415 voltage step down regulator [1].

I’m not 100% sure how I managed to do this great feat. A simplified circuit diagram is below, the main features being

The lack of flyback diode is my best guess of the cause, maybe somehow coupled with the power supply and capacitor? BUT what is curious is the smoke occurred shortly after I had disconnected the solenoid. I had started using the solenoid valve a few times, then shut down the system, disconnected most components from the A-star (including stepper driver, capacitor, relay, and solenoid, but not the TFT), and then connected the DC barrel power jack again. At that time, there seemed some small sparks in the DC barrel jack and then the A-star was smoking quite much. GND and 5V pins on the A-star were found permanently shorted on the A-star. No components were damaged other than the A-star, and the stepper drivers run cool.

I can only explain this in maybe that there could have been damage prior to the smoke, maybe even when the system was turned off and the capacitor/solenoid still energized a short time and then removed (I think the solenoid was on when the power was removed)?? Does that make sense? Things were soldered together so accidental shortage of wires seems less likely.

Unless anyone would like me to post more such pictures, I plan to place a 1N4001 diode across the solenoid. Is there anything else worth doing? 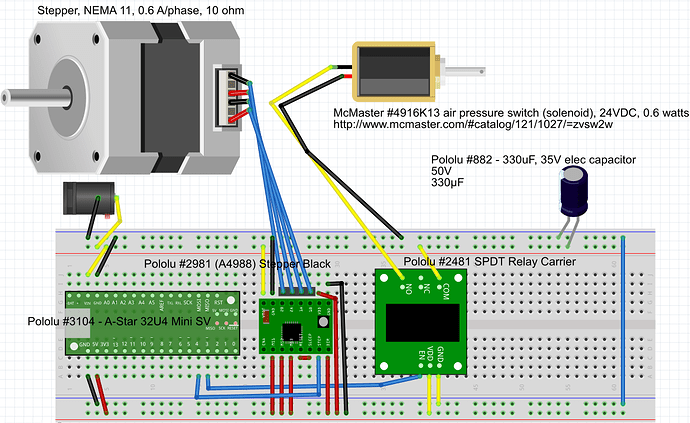 Failure to use a flyback diode is guaranteed to cause damage to something - a solenoid coil can introduce 1000 volt spikes into the power supply, for example.

Your description of the way the failure occurred seems like it could be consistent with a voltage spike from the solenoid coil. A low current high voltage spike could damage one of the semiconductors inside the regulator IC in such a way that it becomes a short, and when a higher current supply is reconnected, the short could heat up and cause the IC to smoke.

If your electrolytic capacitor is really located out on an isolated spur of the breadboard rail like you show in your Fritzing diagram, it might help to move it closer to the supply pins on the A-Star. Ideally the cap should be right next to those supply pins.

By the way, I noticed that your Fritzing diagram shows the VDD and GND on the right side of your A4988 connected to the +5V rail on your breadboard, though I suspect that this mistake is only in your diagram if the stepper and relay worked for a while before the A-Star failed.

Thank you both for comments.

it might help to move it closer to the supply pins on the A-Star. Ideally the cap should be right next to those supply pins.

Speaking of that, some of my systems actually use more than one A4988, and some related images on the Internet show a capacitor on each A4988, and in one message you actually recommended that:

“I notice that you only have a single electrolytic capacitor in the corner of your breadboard for the motor power supply. You might try to place separate capacitors like that on the breadboard at the power inputs for the two stepper drivers. In general, this can help avoid LC voltage spikes, which could damage the board, and it’s possible that some inductance in the system is causing some harmonic that is making the typical switching whine slightly more audible.” – from Motor does irritating sounds

The importance of that is unclear, but if that is the case, it might be clarified on the A4988 product page comments on capacitor usage.

your Fritzing diagram shows the VDD and GND on the right side of your A4988 connected to the +5V rail on your breadboard, though I suspect that this mistake is only in your diagram if the stepper

I don’t know if there was a fuse inside this +15 year old 24VDC wall adaptor, but I’ve since replaced it. It concerns me as a fire hazard when the failure mode is smoke.

Thanks for all. Pololu provides some neat modules and is a useful supply of relevant components, and I’ve learned from it.

You might find the “Understanding Destructive LC Voltage Spikes” page on our site, which talks about reducing LC voltage spikes by adding electrolytic capacitors to boards like this, interesting. Although the problem it discusses is slightly different than the problem you experienced, the general physical principles involved are the same. It might not be strictly necessary to always add a separate capacitor to each separate driver board, but in general, it is a good design practice. Things like the voltage of the power supply relative to the voltage rating of the components being used, the length and layout of the leads between boards and the power source, and the currents drawn by the system can all factor into whether a system will be functional.

For your system, having separate electrolytic capacitors for the A-Star and A4988 might be helpful since you are operating close to the voltage rating of some of the components and you have a component in your system (the solenoid) that is capable of producing large inductive voltage spikes. Of course, the flyback diode is also important here, too.

I know this is an old thread but I see you used the A-star in fritzing. Where did you find the fritzing part? I have been searching for one everywhere.