Hello,
First, I’d like to say that even though this will be my second robot I’ve created, Im still pretty new to everything. Heres a small first draft of how I imagine what it will be: 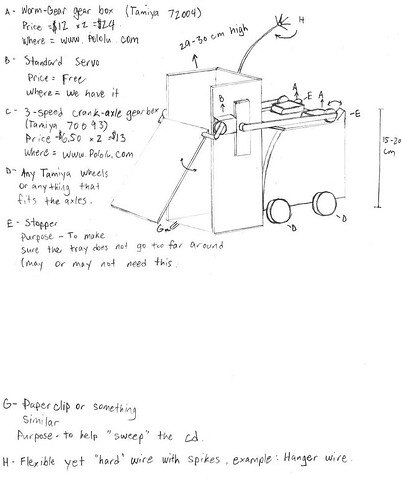 643×800 58.8 KB
Basically, its for a competition, in which we have to pick up items and bring them into a box (there are balloons in the box, thus the spikes). I have a 6 channel Futaba controller and receiver already. Now, for the questions:

I may run into more problems and questions later (I always run into problems… especially after I just solved one).

For those who dont understand what my robot is, heres a description:

Thanks to all who helps in advance.

A regular motor will certainly not work directly with an RC receiver. You will need motor controllers, often called “speed controls” by RC folks. Most hobby RC speed controls are more powerful and expensive than what you probably need, so you will probably have best results looking into small (antweight) combat robot sources.

Thank you for answering.

Is it possible to control 2 motors at once with a single channel motor controller?

Let’s say I wanted to get this:
http://www.robotpower.com/products/scorpion_mini_info.html

Would I be able to control my 2 worm-gear motor gear boxes with that? (not controlled separatly, but at the same time)

Also, which motor controller am I better off between the two? Or are there better ones out there that’s more suitable to my project?

Thank you so much for helping.

In general, you should direct product questions for other companies’ products to those companies. We have not used any of the products you list, but in general, it is possible to connect two motors with one driver. Keep in mind that the worm gearbox uses a motor with a stall current around 4A at 6V, and that it really wants to run in the 3-4.5V range. The Lynxmotion driver lists a maximum current of 2A, so it would not be a good candidate for the worm gearbox.

You might check robot markeplace for other options: http://www.robotmarketplace.com/marketplace_speedcontrollers.html

Keep in mind that the worm gearbox uses a motor with a stall current around 4A at 6V, and that it really wants to run in the 3-4.5V range.

Yes, I’ve noticed that the amps is not sufficient enough. However, isnt the stall current 2.7A, not 4A? It says so on the website: https://www.pololu.com/products/tamiya/re_260ra.pdf
Therefore, would a motor controller that has, say 5A, like this:
http://www2.towerhobbies.com/cgi-bin/wti0001p?&I=LXHUY4&P=7
be good? That speed/motor controller looks a lot smaller than others that I’ve see on-line, and a lot cheaper. Would that be suffice for my robot for what I want it to do? (sorry for asking about a product pololu doesnt have)

Oh, and exactly how fast does the worm gear box go on both ratios? Im not familiar with ratio speeds, and I definitly dont want it to go too fast that it’ll go haywire, nor too slow that it wont be able to pop a balloon (the spikes on the wire of the robot is what pops balloons).

The stall current goes up with voltage (the stalled motor is just a resistor at that point). The motor controller you link to is forward-only, which makes it much smaller and cheaper. Most small speed controls you’ll find at hobby stores are for small airplanes, which do not need reverse. Bidirectional control is significantly more complicated, so the controllers are bigger and cost more.

You can figure an RPM of a bit over 6000 (to make the math easy), which gives you about 20 or 30 RPM when divided by 300 or 200. It seems to me that you could go really slowly and still pop a balloon; if not, you might have a defective spike.

After looking around for motor controllers, heres some:
(I am assuming the worm gearbox uses brushed motors, so I only looked into the ones that are brushed motor compatible)

http://www2.towerhobbies.com/cgi-bin/wti0001p?&I=LXGTY8&P=7
NOT sure if its reversible, I dont think it is though.

http://www2.towerhobbies.com/cgi-bin/wti0001p?&I=LXKAL6&P=7
Very cheap, includes reverse. However, not too sure about it. It doesnt show the amps nor the volts. Is this something different?

http://www.robotmarketplace.com/marketplace_scorpion.html
The Scorpion Mini. Probably the closest to what I need, only problem is the 2.5-5A. However, since the worm gearboxes uses 2.7 at stall (I doubt I will reach stall with the robot Im making), and about just 1A normally(says so on the charts), I think its still efficient. Please correct me if Im wrong.

http://www2.towerhobbies.com/cgi-bin/wti0001p?&I=LXDEM6
Not really liking the price, and it says 23 turn motors…I dont even know what that means. Also, Im not sure if it can run on 6V, so I think this one’s over doing it. On the bright side, it has heat sinks.

https://www.pololu.com/products/pololu/0120/
I really might want to consider this. Please tell me if this works well with the gearboxes (Im assuming yes because of the 5A). What Im not sure of is why are there so many outputs? Can I not use them all and just use the ones I need, such as 1 motor (but connected to 2 motors), 1 power, and one reciever connector? However, compared to the other motor controllers, this seems to be the best choice. Also, does it come with wires, or do I need to get them myself? If not, are there specific wires that I need to get?

And lastly, do you know how much amps a typical store bought RC car can give?

Thank you so much for your help.

The third unit is a mechanical speed control that requires a servo. It’s not what you want. Imagine flipping a toggle switch with a servo and you’re half way there.

The Scorpion Mini is probably appropriate, but you should talk to the manufacturer.

The last ESC is for larger motors, which are often specified in terms of how many times the wire is looped around inside. Fewer turns means shorter wire length and higher currents. You can see that the current spec. is dozens of amps, so it’s definitely enough, and the heat sinks won’t matter. It will probably work at 6V, but as your battery winds down, it might cut out sooner than something made for lower voltages.

Our motor controller works well with the Tamiya gearboxes, but it’s a serial controller, so it won’t work with an RC receiver. No wires are included, and no special wires are required. General “hook up wire” of 20-24 gage should be okay.

An RC car does not give you current; the battery delivers it, and the car consumes it. There is a huge range in currents that motors of the same size can draw. You might figure 2-30A. You can get some idea from the running time: if a 2 amp-hour battery lasts 6 minutes, the drain is about 20A. (The capacity of a battery goes down with how much current it delivers, plus you’re powering other electronics, so the 20A should be somewhat conservative. On the other hand, you’re probably not running the motor at full load for the 6 minutes.)

Thank you! This cleared up so much. The motor turns was really killing me. I decided to go with something else, since none of them really fits to my catergory (except maybe the scorpion)

Odd thing is, ive asked the motor turns question to several other forums, and I even emailed some companies about it. None of them helped at all.

Thanks so much, now after a week and a half of no progress, I can finally start building.[/url]