Hi there,
I own a serial 16 servo controller. I thought it might be interesting to control the servos over LAN, from a remote computer. What I found are different “RS232 to LAN” devices, which all are beyond the affordable price. But one thing I’ve spotted that isn’t too expensive is XPort:
http://www.lantronix.com/device-networking/embedded-device-servers/xport.html
Thes say, that XPort is able to “Allow Telnet communication with the device(s)” which sounds pretty interesting to me.
C’t is a german computer magazine. They always have lots of interesting articles in the internet, about self-made stuff. There is also a manual on how to build a RS232-LAN adapter (http://www.heise.de/ct/04/13/200/default.shtml) with XPort. All needed parts cost around 80 Euros.
Has anyone done something like this before or has experience? I think I’d need a software to control the servo controller with telnet, maybe a shell-, perl- or python script on linux…
Thanks for further ideas on this topic!

Edited: http://www.segor.de/ (also in german) offer all parts for these c’t projects… for example XPort.

I haven’t really done anything like this, but from the links you sent, it seems like the XPort looks pretty cool, and if you can access it with telnet, it will be easy to get your scripts working under linux. If socat doesn’t work out for you, check out Netpipes for the simplest possible access to TCP/IP from a shell script.

What’s your application? Is it really going to be sufficient to have a serial port over ethernet, or do you need the device at the endpoint to have more intelligence than that? If you have any old PCs sitting around, they could easily be converted to ethernet-enabled serial controllers. Another fun way to do it would be to obtain one of the linux-based wireless routers form linksys, get your own version of linux installed on the device, and figure out how to add a serial port. Then you’d have as much computing power as you need in a very attractive package.

The linksys-idea brings something to my mind: My old satellite receiver (Sagem dbox II) does have an Ethernet and Serial line: 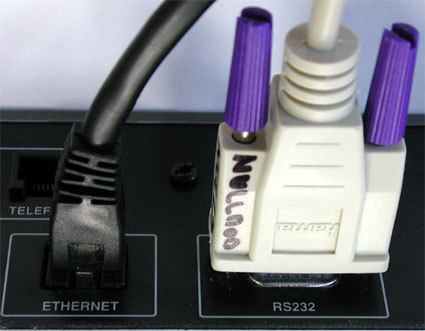 And it can also run linux! Will test this as soon as possible if I can tun the testing C-code on it.

My project is just experimental. I want to control some servos in a room from a server that is about 3 rooms away. Maybe I’ll get the Micro Serial Servo Controller for it, but I actually don’t see how it should be connected to the RS232 interface on the computer. The manual shows just one pin marked as “RS232 serial input” and “logic-level serial input”. Is there a description on how to solder an RS232 cable to it? Thanks

For full serial connectivity, our non-micro servo controller might be better. The micro unit just has a transistor-resistor inverter/level converter that enables RS-232 reception only. To use it, connect your RS-232 transmit line to the RS-232 serial input pin (and don’t forget ground!).