Button board to micro controller to micro maestro 6 channel

I have a micro maestro 6 channel USB servo controllers. Well i actually have 2 of those.

And i have 2 servos.

I wanted to make a button board looking something like this: 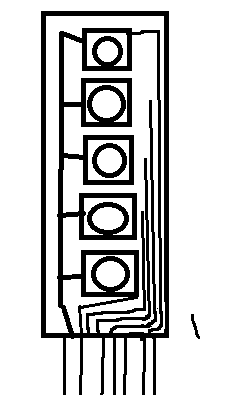 But as im already using 2 servos, then i only have 4 channels left for buttons.
and i need a minimum 5 buttons.

Im just a beginner here to bear with me.

Mabye i could use my other 6 channel maestro, attach buttons to that and connect that to the other maestro which has the motors attached to it and i could control the motors (connected to maestro board nr.1) using the button board connected to button board 2 ?

and this here image from the boards user manual

uhm. since im having at least 5 buttons would i just put the resistor at the back of the board? and connect them? i probably will end up doing so. but my original question is the main thing.

And as of my drawing. is not right that i connect all of the buttons ground together?

basically i have momentary push buttons and i want that you push one. and the motor makes its move. i push another and the motor stops doing the movie button 1 says and starts doing the button 2 move.
So i would press button 1 and it would hold. and then stop once i press button 2.
(no i dont want an on/off switch instead i dont like it.)

As you can see im a complete newbie but i just want to finish this project for once.

Any help is so greatly appreciated.

I am not entirely sure what you mean when you say “put the resistor at the back of the board”, but for each button to be individually recognized, you will need a separate circuit with pull-up resistor (like the schematic you posted) for each channel that you use.

To reduce the number of inputs to the Maestro, you might consider working with combinations of button presses. For example, you could use four buttons to activate six different subroutines. One of the four buttons could be a “control” button that when held down, changes the function of the other three buttons when they are pressed.

Like you mentioned, you could read all five of your buttons with another microcontroller (or Maestro) and communicate via serial with the second Maestro, which would have the two servos connected to it.