I’m building a robot that is meant to avoid walls. I am using the following components :

Arduino Duemilanove
Low voltage DSMC
Solarbotics gm7 motors
Sharp IR rangefinder
9v battery for Arduino
4 1.5 V batteries for the motors
Everything is connected via breadboards as it is a school project.

Now my problem is that it is not working. When i boot the robot up the motors start going breifly and then stop.
It is programmed to move forward until it detects an obstacle. Then it is meant to stop , reverse and turn around.

I have troubleshot based on other threads on this forum and have made the following conclusions :

When the motors are not connected it works perfectly fine. Thus it goes forward until it detects an obstacle , then it stops etc. I have soldered a 0.1 uf cap to the motor leads and entwined them. I only have one motor connected.
Is it noise as I think it is and if so , what more can I do about it ?
Can it be the power supply , would it behave like this then ?

Pics of my steup are here : 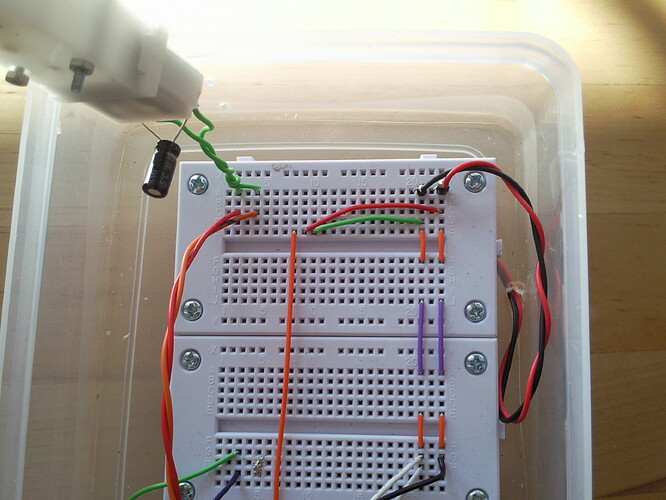 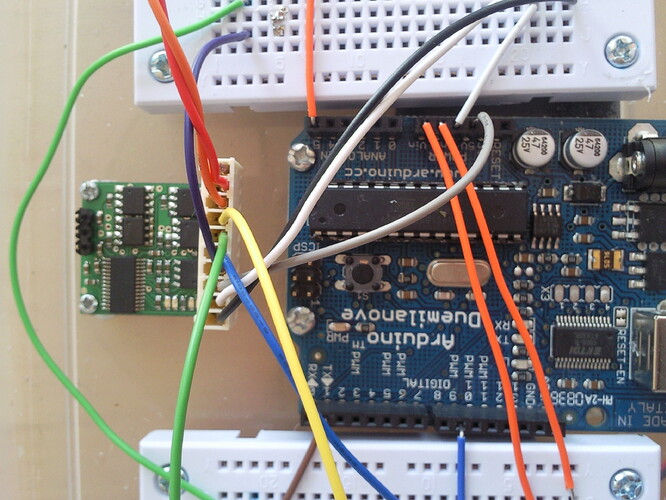 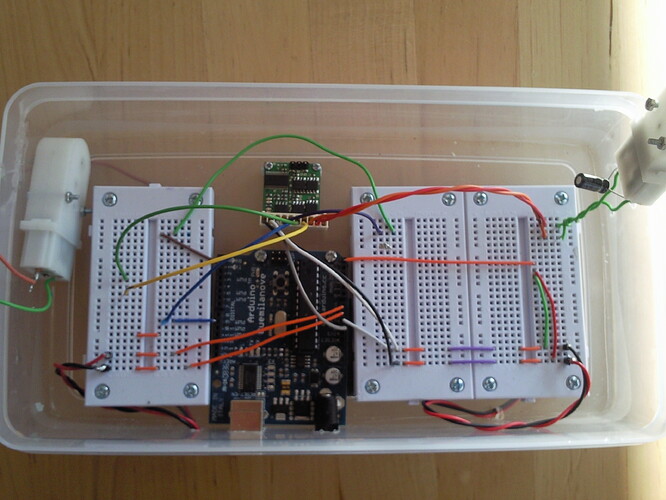 When you say it works without the motor connected, you mean the LEDs on the motor controller show the expected behavior?

In general, the problem does sound noise-related, which is surprising since the GM7 motors have been relatively good in my experience. (By the way, for the GM6/7, I would recommend our newer qik 2s9v1 dual serial motor controller.) It might help to add some capacitors across both your motor and logic supplies. Also, it looks like the capacitor you have across the motor is an electrolytic, which is not good (among other things, it’s polarized, so it could explode when the motor is turning in the way that puts a reverse voltage on the capacitor). You should get a ceramic cap, which usually looks like a small bead or disc, usually in tan or blue.

Yes , the leds show the expected behaviour. Does this mean that the DSMC is working ? ( As in : it isn´t shorted)

I will try the caps across the motor supply , the logic is from the arduino itself where would i put tat cap?

Also , does a larger cap have any relevance ? Will it help ?

Thanks for your help . Will get back to you if the caps don´t resolve the issue.

Another question that I hope you can answer.

If I turn down the motors speed settings so that the draw less current , will this help at all ?
Could I somehow have blown the motor driver and if so , what to do ?

Thanks for your time !

The LEDs working as expected is a good sign, but they are connected before the motor driver, so it is possible for that to be bad. However, if your unit consistently works for a bit and stops, the drivers probably aren’t fried.

For the motor supply, you can use something like a 0.1 uF ceramic capacitor and a larger (10 or more uF, whatever is handy) electrolytic capacitor. A similar combination could be good for the logic supply, which you can bring out to your breadboard (and put the caps there).

Slowing down the speed probably won’t help since the motor controller adjusts speed by quickly turning the motor on and off and varying the percentage of the time that it is on. The switching happens regardless of the speed (except for 0% and 100%), and that is probably where your noise problems are coming from.