If one motor is stalled when using this driver will the other motor stop working?

The two motor drivers are basically independent, so one motor stalling shouldn’t affect the other. However, if your power supply cannot provide the necessary power, the stalled motor could take most of the power and reduce the power available to your other motor.

OK thanks for that but I have one other question I had an unfortunate accident when installing my driver and the following components were accidentally removed, the components that were removed are outlined in the attached image. Will this dramatically effect my motor driver? I know that the one resistors which are tied to the led’s aren’t a big deal it the other one that is the concern. 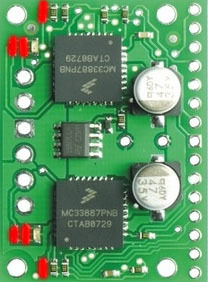 That’s a pretty major “one other question”. The four parts by the connectors are indeed LEDs and associated resistors, so you can get by without them. The other two parts are 33nF caps. The one on top is for the current sense for that motor, so it might be optional or you can easily add it externally. The other one (at the bottom of the picture) is for the charge pump for the bottom driver, so that is crucial, and you will need to replace that on the board.

So could those 2 33nf cap be replaced with a small ceramic capacitor or not? Say replace it with 0.1uf capacitors?

So I replaced the two 33uf (which I broke off) with 2 222 ceramic capacitors.
But there is still this recurring issue: If I bring motor A to a stall motor b still runs but just barely. But if I bring motor B to a stall motor a will not run at all. So the question is this normal operation for the driver or should I simply replace this motor driver? One last remaining question when interfacing this driver how can I make the motors run at the same time? When I use the current setup that I have the motors run but motor B starts a moving about 100ms after motor A, is there a way to work around this, because it makes my bot turn about 90 degrees. Thats all for tonight and thanks for the help.

As Jan said earlier, the two motor channels are independent, so it sounds like the issue is with your power supply, not the motor driver. What is your power source, and what is the stall current of your motors?

As far as your problem with the two motors starting at different times, this is probably either a problem with your Arduino code or the result of having insufficient power to drive your motors.

Ben, Jan thanks So much for the help but is it still OK to replace the two surface mounted capacitors with two 222 ceramic caps? Thanks Again.

I’ll let Jan address your capacitor question. Meanwhile, can you please answer my questions? They are still relevant given that you were experiencing these power issues prior to destroying the capacitors.

The current sense cap is just there to filter your results a bit, so you can use whatever is appropriate for your application. I don’t think there’s too much reason to expect 2.2nF to work for the other one.

OK this should satisfy and confuse both of you. Without replacing either of the 33nf caps and having a fixed power supply all the problems and I mean all the problems vanished. So I ask this question of you Jan, how safe is it to run this driver without the charge pump and current sensor? Will this increase my chances of burning out the driver or damaging it in any way? Because as it stands right now the driver is working just as it should. Thanks for the help.

It looks like you’re missing some words in your post. It’s good to hear that things are working for you. I think it’s likely that you are not getting the full available performance from the motor driver; I don’t know what the smaller cap will do to the life or reliability of the driver.