A4983 1202 with regulator please check my connections

this is driving me mad! I had my 1202 with voltage regulator working perfectly on a breadboard but stupidly did not note all the connections before soldering it together on veroboard.

symptomns: only drawing 10mA, I had it working on 1A for my motors previously. Motor ‘hums’ but does not move.

I am contolling steps with a 4060 TTL at 21 Hz - which seems to be working properly and worked on my breadboard.

Here’s my connections in the order on the 1202 unit:
(by ‘open’ I mean not connected to anything)

Really appreciate any help, I know these are common problems, but its easy to get confused with this.

Just to be clear - the connections shown are on the pins of the board - not internal connections of the carrier - which I know little about.

Just tried lots of other combinations on the conrol pins with no luck. All I get is a whine from the motor but very low current being drawn, no matter how the trim pot is set.

I have two boards soldered to veroboard (yes I cut the strips ok - no shorts there) and both are doing this but they worked on the breadboard.

Have I busted both boards soldering them??

Leaving DIR open will let it float between high and low. You need to either have DIR tied to GND or VDD at any given time.

If all the other connections are ok, does this mean I’ve broken the boards somehow?

When you say ‘tied to ground’ do you mean connected directly or through a resistor or is either ok?

Either directly or through a resistor should be okay. Can you post a picture of your setup? How are you generating the 21hz step input? Do you have a oscilloscope so you can see what you are doing to the STEP pin?

I will post a picture - but it looks a bit of a mess!

I have a frequency meter which is reading 21 Hz, which is what I need.

The main problem is that nothing I do makes the motor draw the current it should (1A) - the circuit just buzzes and takes 10-20 mA. Changin inputs, taking them off, hi / lo, adjusting the pot, nothing - just buzzing motor.

I think the drivers are fried but I have no idea how! 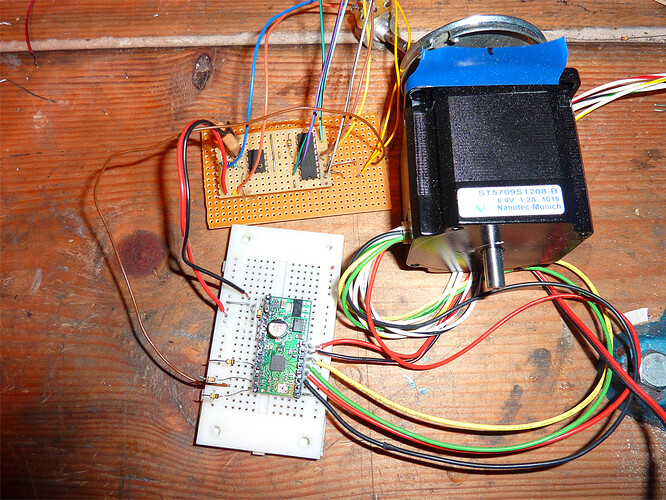 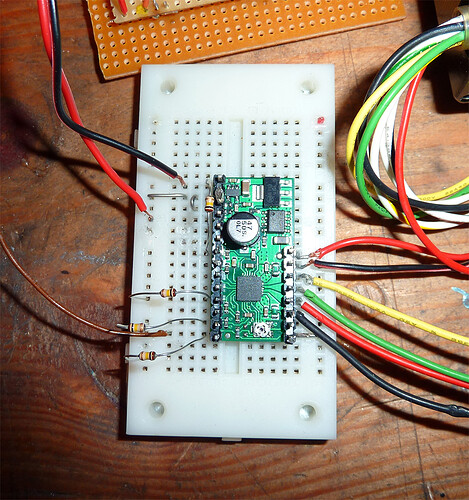 oh, forgot to say - as you can see, I’ve put it back on the breadboard since first posting but symptoms the same.

The brown wire is the TTL ~20Hz

So should I buy new units?

Are the connections correct?

Have you used this motor before at 1A? I notice that it has 8 wires. Do you have it wired as series-bipolar or as parallel-bipolar? Where do the white-color-striped wires go? I can’t see that in your pictures.

How are you powering the motor?

When you were rewiring your circuit, did you have power connected? I see a lot of exposed wires in that picture that might have accidentally shorted together.

I’d interested to know the answers to Al’s questions too.

yes I know it looks messy but there are no shorts. I have the motor wired in series as recommended ( as bipolar) and it worked fine previously, it is rated over 1A. The motor coils read the correct resistance (10 ohm). Something must have damaged the circuits when I was soldering them to the boards and wiring them up.

I have now bought two new units. I think the two I have are dead.

Oh, I forgot, you asked how I was powering it. I have this power supply:

Was running at 12 V previously which gave smooth stepping and I limited it to 1.4A supplied current using the pot as per the instructions.

Turns out I was using a salvaged bit of wire for the power leads. I noticed a rubber sleeve on the positive wire… turns out it had a damn resistor wired in! No wonder it wasn’t getting any power but the voltage looked ok!!!

I’m glad to hear that things are working now. Thanks for letting us know what the problem was!