Hello,
I am running Arduino 1.8.7.
I have Pololu A-Star Boards 4.0.2 installed.
I have Serial1 set to 57600
Serial1 is connected the a Digi Xbee Zigbee module.
My Sketch uses 10810 bytes.
Global variables 878.
The problem i am having is that Serial1 will randomly stop transmitting data. It will receive data with no problems from the Xbee. I have LED’s connected to the TX and RX lines and i can see the data being transmitted and received when it is working. It will work for random amount of time and then just stop. I know that is should be working because i can call a function and all the code in that function runs. It will turn LED’s on and serial out data to the serial monitor, but the tx side of serial1 just doesn’t happen. It doesn’t matter if i reset the 328pb or even do a complete power down with power source disconnected. I can even re-download to the 328PB and same thing happens. But if I leave it set over night its starts working again. I know that sounds bad, but its the honest truth. I cant really find anything online, the closest thing i have found is a post on here from about 10 months ago.

Hi, I’ve been trying to use the second Serial port of the A-Star 328PB (8MHz/3V3). The first Serial port is connected to the PC (Arduino IDE) via USB to program and to use the console to send/receive comands (for testing). The second Serial port (Serial1) is connected to a Wi-Fi module (SainSmart Neu ESP8266 Esp-05). When I try to send a Sketch to the board, I need to disconnect the power cable of the Wi-Fi module otherwise it will fail. When I program the board (without the Wi-Fi Module) i…

Any ideals or suggestions would be great, let me know what other information my be needed.

UPDATE – lol, in the amount of time it took me to post this, which it type very slowly, the 328PB was powered down and when i powered it up, its started transmitting. So I guess i dont have to wait over night.

I am sorry you are having trouble communicating with your A-Star PB. Can you send pictures of your board that clearly show your connections? Also, how are you supplying power to each board?

I have no problems communicating with the 328pb, the problem is it stops transmitting on serial1 randomly. The design has the 328pb on one pcb and then another pcb is stacked on top of it. It is the display and it has the XBee module on it. When i removed the display and reconnected it with wiring harnesses the problem stopped. I think i am going to get some ferrite plates and put one on the 328pb chip. I am curious, the only other thing that could be getting affected is the logic level shifter. Do you have data sheet on the actual mosfets that are on your logic level shifter? or can you tell me what the part number of them is?

Since transmission on serial1 works well when you connect your system without your display hardware, it seems like the source of the issue is with whatever is in that display.

If you post a schematic of everything in your system, I might be able to help you pinpoint the source of the issue. Also, like I mentioned in my last reply, knowing how you are supplying power and seeing pictures of your setup and workspace would be useful.

As for your question about MOSFETs, are you using this Pololu level shifter? 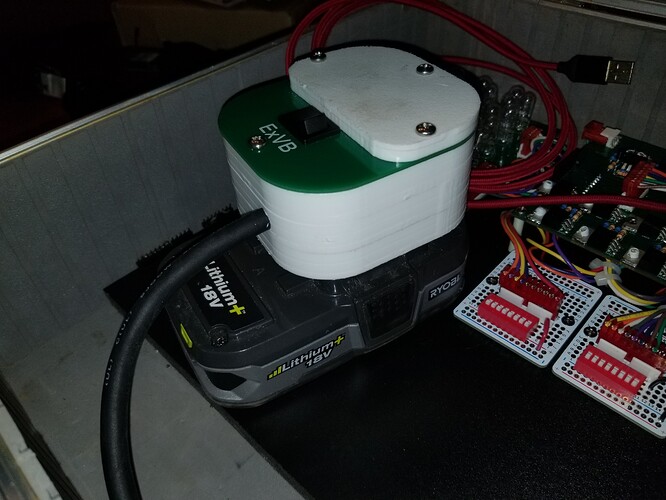 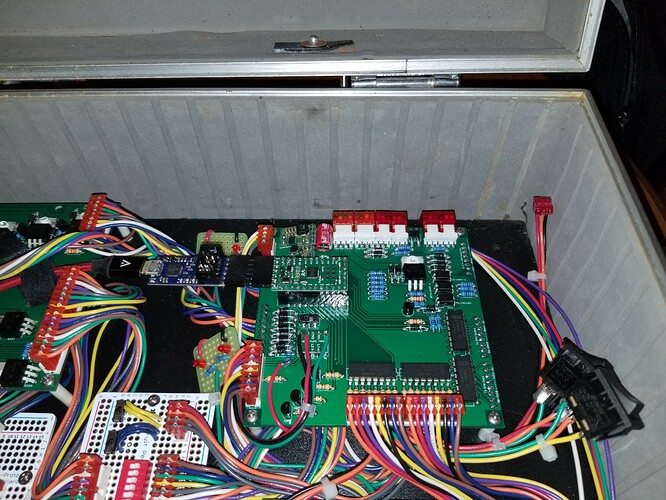 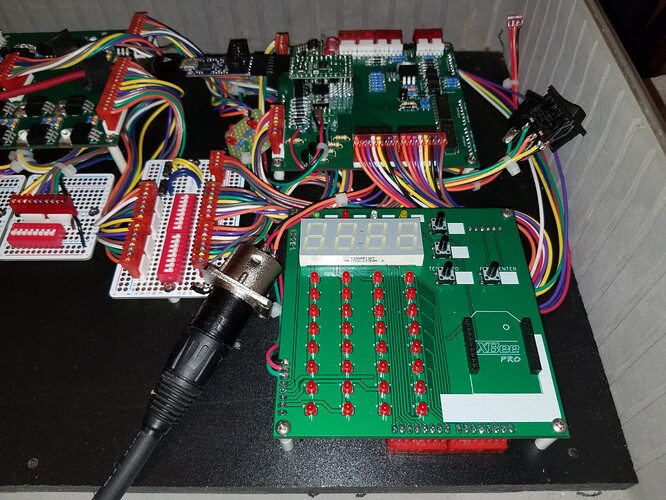 20190212_1941164032×3024 4.42 MB
Not much to this pcb, top ratsnest is gnd, bottom ratsnest is 5vdc. just leds, buttons, and the xbee.
As soon as I put the a star in a socket, and made my headers into wires, so that the display could be where it is, it started working perfectly.
I did solder some tx and rx leds to both sides of the logic level shifter. just to have a visual confirmation that data was transferring. Yes the logic level shifter is a pololu, just like the 5vdc and 3vdc step down regulators. Im going to solder up a second unit, without all the wires, and put a ferrite plate on the a star. I think my display pcb may be making some extra antennas due to the frequency of the LED grounds being switched on and off, and the xbee probably doesn’t help either.
JonathanKosh February 13, 2019, 8:35pm #6

I recommend that you simplify your system and gradually reintroduce various combinations of parts to try to isolate the problem, which it sounds like you are already working on doing, so let us know what you find out.