Hi, recently I was working on the hexapod tutorial in order to become familiar with the mini maestro series. I followed all the steps thoroughly. I tested the board before and after attaching the three motors. Everything worked exactly as it should. Then I attached the distance sensors. Upon connecting the board to USB (with no other power connection) the board quickly let out a puff of smoke. I quickly disconnected everything and searched for what I though was most likely a short.

I could not find anything. I reconnected the board (without changing anything) and everything was fine this time. I used a DC Power supply to provide exactly 4.6v and slowly unlimited the current in order to test the servos. Initially the motors were then extremely jittery and almost uncontrollable (this is after the current was fully unlimited by the DC PS). I called tech support and we identified the chip that fried itself as the usb power chip. As of today the board and everything works as described in the hexapod tutorial although the motors are still very jittery and no longer have the smooth motion exhibited when I initially tested them.

My questions is: Has anyone had this happen to them? What could be a possible explanation? (Again my first thought and the most obvious was that I had caused a short, but I could not find one. And the board worked again without changing anything.)

I have provided pictures below of the board as it was exactly after it fried.

I am also requesting consideration for a replacement board. Thank You. 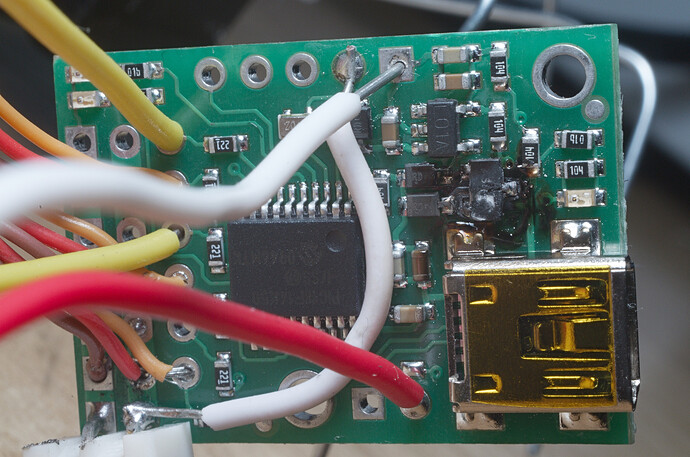 Thanks for posting such a nice picture. I don’t think we have seen or heard of such a failure. We tried variously shorting out that MOSFET with up to about 3A, and it did not blow like that, and it would be surprising for you to get that much power out of a USB port. The only thing I can think of is that some almost unlimited source like a battery accidentally got shorted across that part; are you sure that couldn’t have happened?

In general, your soldering looks kind of sloppy, and it looks like you could be asking for shorts all over the place, so try to be neater on future boards, and make sure that no cut wire bits or pieces of solder end up nestled among the parts on the board.

We’ll send you a replacement today.

Thanks for all the help and the speedy replacement. We were only using a DC PS for this project(which wasn’t on at the time) so I think that is not possible.

I’m actually a physics teacher so this board is near the first time my students have had a crack at soldering. So, yea, it is a bit sloppy. But we have some pretty amazing projects coming from the students for such little experience. Very glad I found this site. Thanks again.